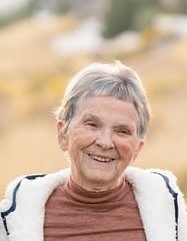 Barbara (Bobbe) “Aunt Stupid” Wimmer Kidrick passed away July 1st, 2021. She was born April 12th, 1934, in Moab, Utah to Charles E. and Erma S. Wimmer. Bobbe was the youngest of five siblings and spent her childhood in Salt Lake City, Crescent Junction, and Moab. Bobbe married the love of her life, Ralph Kidrick, on October 13th, 1955, in Aztec, New Mexico; they were married for 65 years.  Together Bobbe and Ralph had two daughters.  Ralph’s job took them all over the country and they lived in many states until their daughters started middle school. They then settled in Cottonwood Heights, Utah where they lived for 30 years. After Ralph retired, they resumed traveling, visiting most of the United States.

Bobbe was a talented artist, an animal lover, a storyteller, a nature enthusiast, and a loving wife, mother, and grandmother. She worked for Tracy-Collins Bank (now U.S. Bank) and the Salt Lake County Library. Bobbe was a member of the Order of Eastern Star, serving as Worthy Matron of Bethany Chapter and Worthy Grand Matron of the state of Utah. She was a majority member of Bethel #5 Jobs Daughters International as well as Bethel Guardian of Bethel #7. Bobbe was also a talented painter and was always willing to take on any artistic project. In her later years she painted pet portraits for family and friends; she loved creating those memories and her works are hanging in many homes across the country. Additionally, Bobbe was the family historian. She would often post family stories on social media so they could be shared with all of the family members. Bobbe was also an activist at heart. She was not afraid to state her opinion, and was proud to have helped raised strong, well-spoken daughters and granddaughters who are not afraid to do the same.

Bobbe is survived by her husband Ralph Kidrick, daughter Vanessa Tuckett, daughter Valerie and son-in-law Joe Rohret, granddaughters Sarah (Cody) Dunn and Amanda Tuckett, as well as many nieces, nephews, cousins, and extended family members who considered her their adopted mom. Bobbe was preceded in death by her parents, Charles and Erma, her four older siblings, Bette, Bud (Ed), Duane, and Pat, and her son-in-law, Dan.

Services are currently pending and the family requests in lieu of flowers, donations be made through Venmo to the Bobbe Kidrick Memorial Scholarship (Bobbe-Kidrick-Memorial) at Mountain America Credit Union which will benefit members of Job’s Daughters in Utah.

The family would like to express their deepest appreciation to the members of Herriman emergency services for their assistance and kindness.

To order memorial trees or send flowers to the family in memory of Barbara (Bobbe) Wimmer Kidrick, please visit our flower store.
Send a Sympathy Card