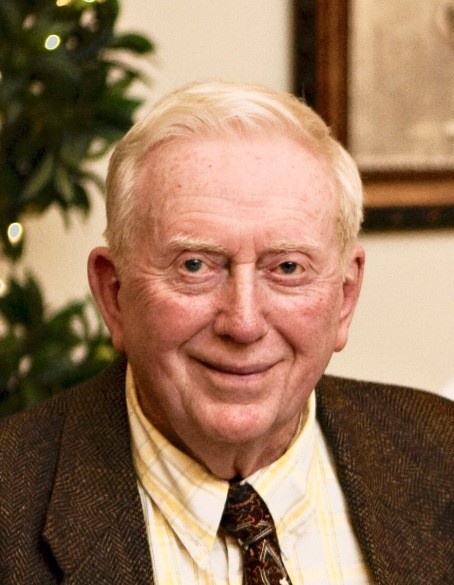 Blaine Avery Gardner, age 86, died peacefully at home on Sunday morning, May 28th. He is now free from the pain and frustrating limitations of his aging body. His curious mind and keen sense of humor were active to the end. We miss him dearly and are so grateful for his life of service and Christ-like love.

Blaine was born 21 February, 1931 to Avery J. and Zenia Mae Stallings Gardner. He was the oldest of five children. Donald, Shirley, Jay, and Ross all preceded him in death. He was born and raised in Ogden, Utah. He spent summers with his grandparents in the Odgen Valley. Later in life he spent many summers back in Liberty with his children and grandchildren having "Cousin Camps”.

He attended Dee School, Madison School, Central Junior High, and graduated Ogden High, and Weber College. He also graduated from Brigham Young University where he served as student body president during the summer of 1955 . He served honorably in the Army. He enjoyed sharing stories of his 2 ½ years in Samoa as a missionary for The Church of Jesus Christ of Latter-day Saints.

On August 20th, 1958 (twelve days after returning from his mission) he married the girl of his dreams Carolyn Jean Skeen in the Salt Lake Temple. He cherished her and always treated her with respect, honor, and tenderness.

Blaine was a faithful member of The Church of Jesus Christ of Latter-day Saints. He served wherever he was needed and often without being asked. His favorite calling was being nursery leaders with his wife for 18 years. He was famous for drawing “kitties”. Hundreds of children who had Brother Gardner in nursery remember having him draw a little winking kitty on the palm of their hand.

He worked for Zions First National Bank for 29 years. He pioneered the use of the very first computer at the bank. He retired as Vice President in the Real Estate Department.

Dad has numerous and varied hobbies, talents and skills. He has a sign in his office that says “PaPa can fix it”, and he could. He was a photographer and had his own darkroom. He was a locksmith and had a key shop in his office. He faceted gems, intricately cut coins, made balloon animals, created wood carvings, and turned beautiful things on his lathe. His wood shop is legendary. He dedicated much time and talent to family history. He was instrumental in opening the Family History Center in Bountiful, where he taught hundreds of people to do family history. Dad was always teaching. He taught us to love, serve, build, fix, create, and problem solve.

Many nieces and nephews, and cousins

He was preceded in death by son Lee, daughter-in-law Carol, granddaughters Kara, and Naika.

The family will receive visitors on Sunday evening from 6-8 pm at the Bountiful 31st Ward: 585 East Center Street, Bountiful. Funeral Services will be held Monday June 5th at 12 noon also at the church with visiting before from 10:30-11:30am. Interment will be in Brigham City Cemetery.

To order memorial trees or send flowers to the family in memory of Blaine Avery Gardner, please visit our flower store.
Send a Sympathy Card