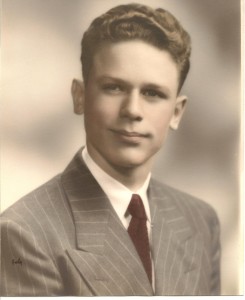 C. William Smith (Bill), 81, passed away from his earthly life peacefully at his home in Alpine on April 6, 2013. Born October 21, 1931 in Salt Lake City, Utah to Gerrit Smith and Helena Swart Smith.

He was eternally sealed to Sally Cochrane Smith in the Salt Lake Temple April 16, 1964. Bill retired from the Union Pacific Railroad after 38 years of dedicated labor. He was a faithful member of the LDS church, earning his Eagle Scout award and serving in many callings over the years. He sought after the plain and simple things in life and always valued the relationships he had rather than material things.

He was an avid fan of BYU sports, but his greatest joy was being with his family and is survived by his wife of 49 years, Sally and his eight children: Jeffrey of Alpine, Trevor (Jill) Smith of American Fork, Christine (Paul) Jones of St. George, Steven (Julie) Smith of Colorado Springs, Marylynn (David) Miller of Alpine, Debra (John) Buffo of Springville, Allison (Morgan) Manning of Highland and Loralee (Travis) Isaksen of Eagle Mountain and 23 grandchildren. He is also Survived by his brothers Robert Smith, Jerry Smith, Ted Smith and Sister Marjorie S. Hatch. We love you Dad (Bill) and we'll miss you greatly. Bill was preceded in death by his parents and brother Joseph.

Viewing will be held from 10:00-11:00 a.m., Wednesday, April 10, at the LDS Church, 890 North Main Street (Heritage Hills Drive) Alpine, followed by a graveside service for family and friends at the Alpine City Cemetery, 424 N. Main Street. Condolences may be sent to the family at www.SereniCare.com
To order memorial trees or send flowers to the family in memory of C. William Smith Bill, please visit our flower store.