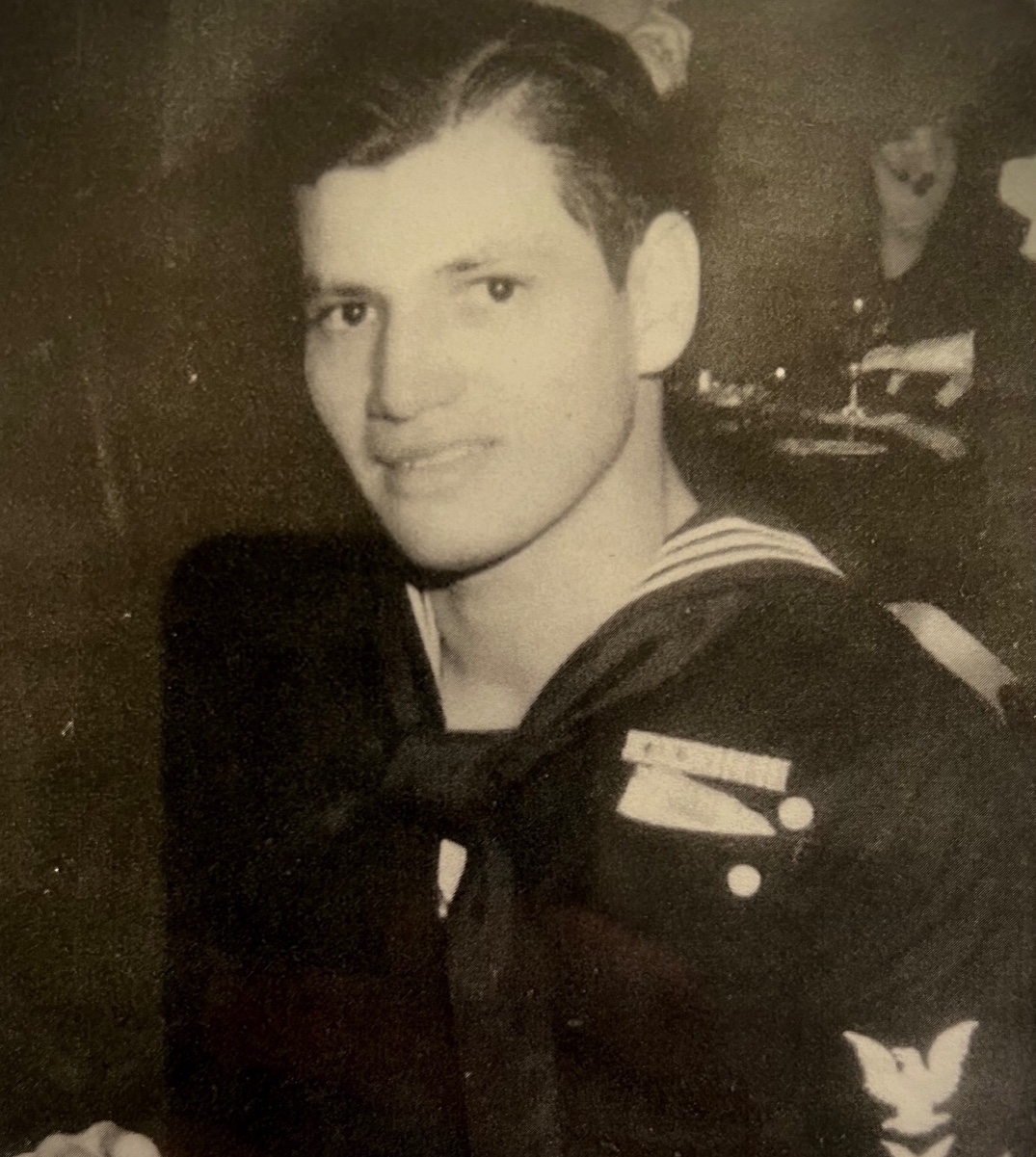 Carlos Daniel Cerna, a.k.a Charles Daniel Powell passed away peacefully May 7, 2022 in his home.  He was born March 6, 1921 in Anniston, Alabama to Segundo Cerna and Rosa A Aguire.  He had a brother Johnny and a sister Maria.  Throughout the next ten years they lived in and out of orphanages in Indiana.  In 1933, they returned to live with their mother and her husband, John Elmer Powell in Chicago, Illinois.  Carlos graduated from Wells High School.  In high school, he formed a very close relationship with his homeroom teacher, Gustav A. Carlson and his wife Lucille becoming his only real mother and father relationship from 1937 until their deaths in the 1980's.

After Pearl Harbor on December 7, 1941, Carlos attempted to enlist in the U.S. Navy but was turned away because of color-blindness.  He later tried to enlist again and this time the Navy overlooked this handicap.  At dawn, on October 25, 1944 he was the Bridge Talker on the destroyer USS Johnston fifty miles east of Samar Island, in the Philippine Sea. The men of the Johnston were expecting to be relieved by other ships when the radio crackled with frantic communications between Navy pilots and ships in the area. Soon after, four Japanese battleships, six cruisers, and 11 destroyers came over the horizon, headed directly for the small Navy carrier unit. Cerna scrambled to his GQ station as the Firecontrol Director Radar Rangefinder operator. His job was especially crucial because of periodic rainsqualls and smokescreens the ships were discharging. He worked steadily during the three-hour battle.

At 0730, Cerna was knocked flat when a Japanese cruiser blasted the Johnston with three 14-inch shells, partly disabling it. At 0950, Cerna responded to the order to abandon ship. As he approached the port bridge railing, he hurried over the railing in response to a nearby shell blast. He endured 52 hours in shark and barracuda-infested waters with meager rations and little water. Several times Cerna heard someone pulled underwater by a shark. An officer who was nearby disappeared, then popped back up, missing some clothes. Others escaped with bite marks. In all, there were 56 percent casualties. Throughout the ordeal, Cerna relied on his faith. At noon, on the third day, a landing craft appeared on the horizon. One of the sailors signaled it with a mirror and the survivors were rescued. Cerna received a meritorious advancement to Yeoman 1st Class for exemplary action in battle, along with thirteen of his shipmates.

He was awarded many medals and ribbons including two Purple Heart and two Bronze Star medals.

After his honorable discharge in 1945, he earned a BSME degree from the University of Wisconsin and a Master's Degree from Penn State.  He worked on the Apollo space program and retired from AFPRO/Thiokol.

He loved to travel, camp, fish and swim.  He also enjoy reading and watching T.V.

He is survived by his wife of 42 years and his children; Jennifer Powell, Diana (James) White, Lori Powell, Victor Powell (Gayle Mack), Cheryl Cerna. Grandchildren; Eric and Baba Abben, Kevin, Patrick and Brett White, Amber Powell, Holly and Sarah Powell, Erica Thomas and Danica Cooper, and 21 great grandchildren and 1 great-great grandchild .  He is preceded in death by his parents and his brother and sister.

There will be no services at this time, but in the near future Carlos will be interred at Arlington Cemetery in Washington D.C.

To order memorial trees or send flowers to the family in memory of Carlos Daniel Cerna , please visit our flower store.
Send a Sympathy Card