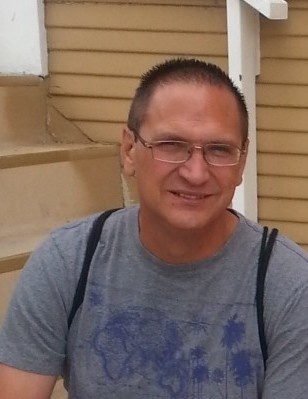 Curtis Colby passed away peacefully at home in his sleep following a two year battle with end-stage liver disease. Curtis was born in Salt Lake City on July 8, 1962, to Betty Lou Black and James Leo Colby. An avid skier, Curtis was part of the Park City Volunteer Ski Patrol for over a decade. He was happiest in the mountains and was excited to move to the East Bench of Sandy four years ago. Curtis loved to travel. His favorite trips included a Bermuda cruise with his wife Dani (where they spent a day exploring the island on a moped), several summer vacations in Cancun, and a very memorable Mexican Riviera cruise with Dani and the kids. A true foodie, Curtis enjoyed exploring different cuisines, with sushi being a favorite. Curtis adored animals and was the proud dad of four rescue doggos. He liked old-school rock, silly dog videos, and the History Channel. Curtis worked at Winder Dairy for many years and always said he was the best milkman around. Most recently, Curtis spent several years at Advanced Restoration. He loved his job and the opportunity it gave him to interact with people.

Curtis’s family and friends will always remember his generous heart, dry sense of humor, and true kindness. He was a gentle, caring man who loved people, never judged, and was incredibly proud of his children. He was tolerant and good in every sense of the word, and will be incredibly missed.

Curtis’s wish was to have his remains cremated and scattered in his favorite places, a wish his family will honor. A celebration of Curtis’s life will be held on September 22, 2019, between 4 and 9 p.m. at 938 East White Pine Way, Sandy. In lieu of flowers, donations in Curtis’s name can be made to the Utah Humane Society: https://www.utahhumane.org/donate/wish-list (select In Memory Donations).

To order memorial trees or send flowers to the family in memory of Curtis Colby, please visit our flower store.