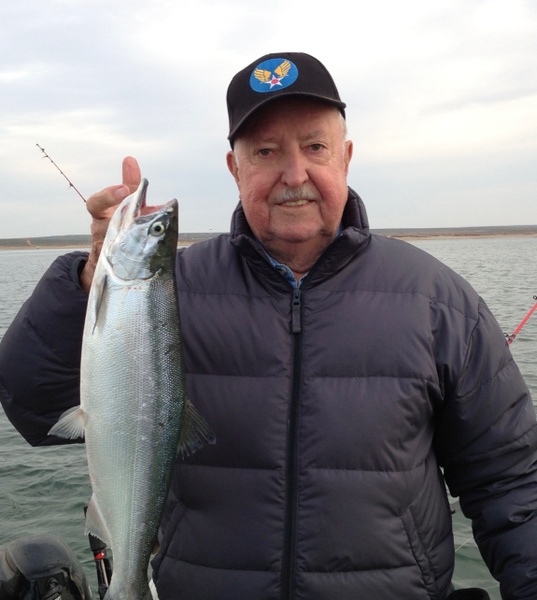 Edward Arnold Powell  was born on February 10, 1926 in Pocatello, Idaho to Thelma Arnold and Eldward Lewis Powell.  He grew up in Anaconda Montana and then in Rexburg, Idaho.  He was the oldest of 5 brothers.  He played sports in Rexburg but he also learned to play clarinet and saxophone and was even in a band.  After he graduated high school, he joined the army to fight in WWII on September 21, 1944 and was sent to Amarillo, TX for training.  He became a crew chief for a P-38 fighter and fought in the Pacific theater.  He served in the military during the occupation of Japan after the war ended.  He also served in Korea.  He was mustered out of the service on October 29, 1946 in Ft. Lewis Washington.

He married Hope LaRue McCulloch in Amarillo, TX on December 31, 1944 and 10 days later, shipped out to the south Pacific for the war.  In 1947, his son Jeffrey was born and in 1953, his daughter Cynthia was born.  He divorced Hope in 1954 and married Marita Christensen in 1955.  They had a daughter, Tazma Kelly Powell, who only lived one day, and he and Marita divorced in 1956.  In 1965, he met and married Dorothy Greenberg Paret and together raised her 2 sons, Jonathan and Terry.  After their divorce in 1989, he married Margaret Gunster in 1992 and they were together for 7 years before divorcing.  He continued to live in Florida until 2018 when he moved to Salt Lake City.  He is survived by his son  Jeffrey (Monika) of Murray, UT and Cynthia (Anthony Garrett) of Jacksons Gap, AL, 2 step-sons, Jonathan Paret of Washington DC and Terry Paret of El Cerrito, CA, 5 Grandchilden, 12 great grandchildren and 1 great great grandchild;  brother and sister-in-law; Ted and Nedra Powell of Centerville, Utah.

He lived in Alaska from 1956 to 1964 and owned his own insurance agency there.  He spent a lot of time hunting and fishing in Alaska.  In 1964, he moved to New York City to manage the Alaska Pavilion at the New York world’s fair.  After the fair, he worked at two large insurance companies and later started his own insurance company which he later sold to Bank of America upon his retirement.  He spent his retirement years in Palm Bay and then Pt. St. Lucie, Florida.  He was active for many years in the Big Brother program and he and his Little Brother Alex King have remained lifelong friends.  He went fishing often and enjoyed the warmth and humidity of Florida.  At age 88, he moved to Salt Lake City to be near his son Jeff after falling and breaking some ribs in his home.  He passed away at the Escalante at Willow Creek Assisted Living Center at 6:40 am on May 12, 2022.  He will be buried in the Utah Veterans Memorial Cemetery in Bluffdale, UT. on Tuesday, May 17, 2022.

To order memorial trees or send flowers to the family in memory of Edward Arnold Powell, please visit our flower store.