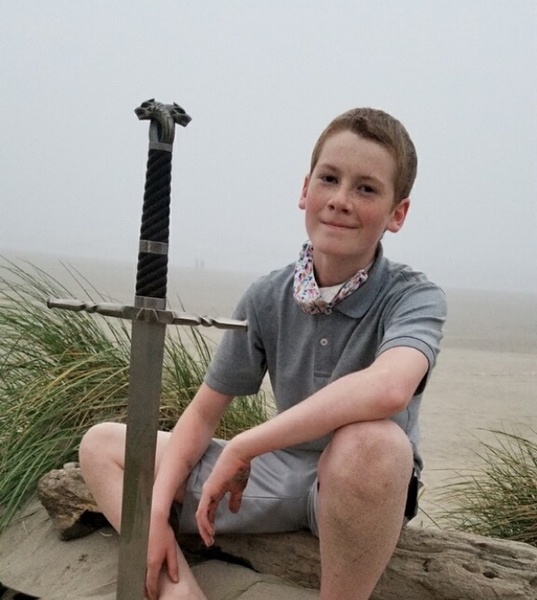 Elijah Thomas Augustine was born at home on May 13th 2008. His characteristic coppery red hair came in soon after as if to reflect his vibrant personality.

At a young age, Elijah developed a fearlessness about life that made his parents both very proud and very alarmed at the same time. Jumping from high places became common for him, whether from off the backs of couches or off the terrace and over the planter boxes in the back yard.

At ten years of age he was diagnosed with rhabdomyosarcoma, a relatively rare form of soft tissue cancer. Eli was well cared for by good doctors and especially excellent nurses. It was not unusual to overhear the nurses whisper to each other, “He is sooo cute!” Many of these medical professionals went well above and beyond the rules in caring for Eli.

After one surgery on his foot to remove a large tumor he ran a tough negotiation with his doctors to get early permission to resume leaping off the terrace. The doctors tried to be firm but would generally lose those types of negotiations, falling prey to his clever riddles and charming personality.

Elijah liked to learn how things worked, and he loved building and inventing things. The “gravity offset device” being the most famous. A contraption of ropes, weights, and pulleys, it allowed the user to jump high and just almost fly for a brief moment before nearly bashing their head against the top of the swingset. That same device also became notorious for almost eating one of Eli’s fingers which resulted in another emergency room visit.

The cancer diagnosis with its grim prognosis of near certain death within five years accelerated and shaped Eli’s approach to life and death and focused him on spiritual things. Prayer was his lifeline to God during his trials. His faith and trust in Jesus Christ reflected in his calm and mature attitude while facing down death and pain, along with the other otherwise normal difficulties of being a teenager.

Elijah was thirteen when he “graduated” early from mortality and entered into eternity on November 17th, 2021 in the same house he was born in. He was watching a movie with his brothers and sisters, “as a family”, just like he loved.

He was preceded in death by his grandfather Lloyd Earl Augustine and is survived by his parents, Elaine and Adam Augustine and his brothers and sisters Joseph, Valerie, Andrew, Ella, Peter, Noah, Tabitha, and Elizabeth, and by his grandparents Dan and Juleen Clift and Rochelle Augustine and a wonderful multitude of aunts, uncles, and cousins.

Eli's mother has written a blog about his journey at elitheboss.com

To order memorial trees or send flowers to the family in memory of Elijah Thomas Augustine, please visit our flower store.