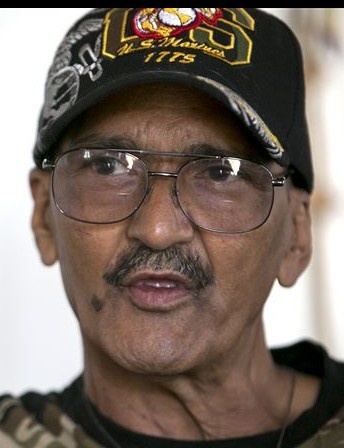 Obituary taken from a story in the Ogden Standard Examiner

Eugene Morris’ search for peace took nearly four decades, but his longtime friend and advocate says he did eventually find it.

Morris, 65, a former Marine and veteran of the Vietnam War, died Dec. 14 after a long battle with liver cancer.

During an interview for a profile published in the Standard-Examiner earlier this year, the Ogden resident said he was 19 when he volunteered to serve in the Marine Corps and was shipped off to Vietnam in 1969.

Morris said the horrors he experienced during combat in Vietnam touched off almost 40 years of drug addiction and intermittent homelessness.

When he returned from war in 1972, Morris lived around the Washington D.C. area, mostly wandering the streets and doing drugs. In the profile, Morris said he used “anything and everything I could get a hold of.” He moved to Ogden in 1989, linking up with a stepbrother that was living in the area, but he continued to live a transient lifestyle.

Multiple attempts at sobriety and stability failed until around 2008, when Morris forged a friendship with Terry Schow, who was then serving as director of the Utah Department of Veterans Affairs.

Schow, himself a Vietnam veteran, went to bat for Morris during a sentencing hearing related to drug charges. Morris was facing prison time, but Schow urged the judge to allow him to enter rehab instead. Morris entered a drug and alcohol treatment program at the First Step House in Salt Lake City and followed his rehab stint with an 18-month transitional program at the Ogden Homeless Veterans Fellowship, which helps homeless veterans find permanent housing.

Morris eventually got clean and in 2010, with assistance from the U.S. Department of Housing and Urban Development’s Housing Choice Voucher Program, began living in his own home on 28th Street in Ogden.

Schow said Morris’s health had been failing for weeks before he died. Morris applied for a liver transplant, but doctors determined his health was too poor to qualify.

“We had him over for Thanksgiving dinner and before that, we took him to the Veterans Day parade in Ogden,” Schow said. “He was frail and had to be wheeled around in a wheelchair. He had the liver cancer, but he had also gotten pneumonia. His system just started attacking him on multiple fronts.”

Morris really has no family to speak of, Schow said, and the former VA director has made it his responsibility to clean out his house and arrange mortuary services. Schow said anyone interested in lending a hand can contact him by email at tschow48@gmail.com.

A memorial service for Morris is will be at 4:00 PM on Tuesday, Dec. 20 at the American Legion-Baker Merrill Post 9, 845 West 24th Street in Ogden.

“I really hated to lose him,” an emotional Schow said Friday. “He overcame a lot in his life. It took him a while to get where he wanted to be, but he got there. He never gave up. He was a role model for people in situations similar to his.”

Andrea Morris, who was Eugene Morris’ VA social worker, posted a tribute to him on Facebook.

“This man died sober and fulfilled more dreams than he ever thought he was capable of,” she said. “I am honored to have served him.”

Schow said Morris’ death has left him feeling empty, but he takes solace knowing his friend overcame his demons.

“He was just such a good man,” Schow said. “He’d send you little texts on the holidays and he’d buy presents for my granddaughter, even though he didn’t have a lot of money. It’s sad that he’s gone, but he changed his life and I’m proud of him.”

To order memorial trees or send flowers to the family in memory of Eugene Samuel Morris, please visit our flower store.