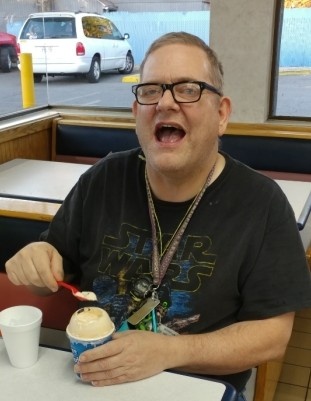 Fred Kempton passed away on Friday, May 10, 2019 at the age of 59. His mother Frances Kempton passed away a few years ago. He is survived by his sisters Kathryn, Krystal, and Kimberly and brothers Joseph, Allan, and Kenneth. Fred lived and worked through Columbus Community Center for many years. They provided excellent service to him and cared for him deeply.

He was intelligent, but struggled his whole life with non-verbal autism. For our family he was one of the best teachers of patience, compassion, and curiosity. I will always remember him as a "tinkerer". He could take random materials and build fully functional objects. His room was always filled with artwork and "projects". And he lived life simply. Whenever we visited him, he would excitedly show us things in his house that were important to him, and we never had to worry about chit chat or small talk with him. He'd point to things that were meaningful, then point us to the door when he was finished. He would be at church with his mother every Sunday in the back of the room until she passed away a few years ago. I can't imagine her joy and his as they embrace in heaven being able to fully communicate with each other for the first time.

Fred Kempton was kind, gentle and although he was non verbal he learned to communicate well with those who knew him. As a child, a pull on the arm,(with a bit of twisting if ignored) led us to whatever he wanted us see or do. He was loved and cared for by family and all those who became his family at Columbus community center where he spent most of his adult life. He learned electronics, wood working and other coping skills at the American Fork training center. One day when we visited him there when Krystal was a teenager the electronics skills he learned there allowed him to fix a transistor radio and a tube radio. When he came out of his room having had the door locked for about two hours, both radios worked. To this day, no one knows how he did it! We will all miss you Fred.

A Memorial Service for Fred will be held at the Columbus Community Center, 3495 S. West Temple, South Salt Lake City, Utah, 84115. in the Activity Room at 1:00 PM

It’s a new day so bright and fair

My big brother went away

You see he died the other day

And many people for us pray.

I am so sad, don’t get me wrong

But I also sing a joyful song!

That God his pain did not prolong.

My brother could not talk you see,

But now his spirit has been set free,

And it can talk just like you and me!

His spirit has a wonderful voice,

And I can almost hear him rejoice,

to once again have found his voice!!

Up in heaven he’s not alone,

Cause that’s where Mother too has flown

Oh the reunion they must have had,

While here on earth we all were sad,

That God has given us this chance

To in His mercy with Him dance

And someday to His throne advance.

With my friends and family I now confide

That a plan of happiness God did provide

That life continues on the other side!

To order memorial trees or send flowers to the family in memory of Fred Kempton, please visit our flower store.