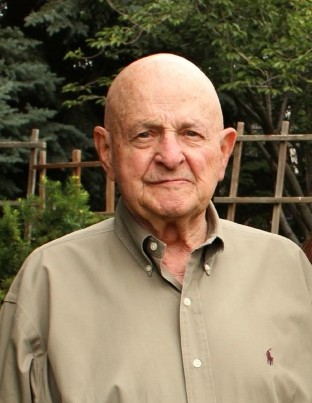 George Robert Chlarson, of Salt Lake City, Utah, passed away Wednesday, May 25th after a full and endearing life. A graveside service will be held 11:00 a.m., Friday, June 3rd in the Salt Lake Cemetery.

George was born in Salt Lake City, Utah on June 15th, 1924 to Joseph and Elsie (Harper) Chlarson. He graduated from South High School and attended the University of Utah and Utah State University. He served in the U.S. Navy during World War II.

He owned a heating and air-conditioning business with his father and brother Jack, and later worked as an Environmental Specialist for the State of Utah.

George was a devoted husband and father. He loved boating, especially with family and friends at Lake Powell. He and Rose also enjoyed hiking and spending time at their cabin in Brighton and at the beach with children and grandchildren.

Active in the Church of Jesus Christ of Latter-day Saints, George engaged with the youth, and in later years completed a Salt Lake temple service mission with his wife Rose.

After retirement, George traveled with Rose around the world, visiting Europe, Israel, Egypt, Hong Kong and China. He also enjoyed road trips, driving cross-country to visit historic sites in Canada and the US.

George was preceded by his wife Rose and his daughter Lynn. He is survived by his four children, Rob (Melissa) Chlarson, Joy (Larry) Clarkson, Craig (Julieta) Chlarson, and Julie (Johnny) Wood, his 14 grandchildren and 17 great grandchildren, and his dog Bubbles.

To order memorial trees or send flowers to the family in memory of George Robert Chlarson, please visit our flower store.