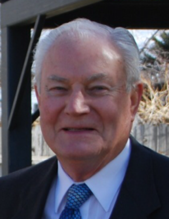 Thomas Gerald Bettridge, 86, was reunited with his loving wife on June 15, 2016 with his family by his side.

Gerald was born March 29, 1930 in Milford, Utah, to Thomas and Leola Turley Bettridge. He grew up in Caliente, Nevada and attended Lincoln High School. He enjoyed a relationship with many of his High School friends throughout his life. Gerald went on to receive a Bachelors Degree in Accounting from theUniversity of Utah.

Gerry was drafted into the Army during the Korean War. He served for two years in the military, then returned to the Salt Lake City area where his parents had moved. He then served an LDS mission to the Central Atlantic Mission which included the Virginia states and North Carolina.

Gerry married Elaine Farnsworth on February 19, 1960 in the Salt Lake LDS temple. They enjoyed 49 years of marriage before her death in 2009. They have five children. They made their home in Layton, Utah for 47 years where they loved their beautiful house and yard. It provided many years of happiness for them as they worked in the yard and raised their family.

Gerry worked for the Internal Revenue Service for 30 years. He and his wife bought the Karmel Korn Shoppe/Pop-N-Stop in the Layton Hills Mall, and it provided many years of enjoyment for the family as they worked together there until it was sold in 1998.

Gerry was an active member of the Church of Jesus Christ of Latter-day Saints, and received many blessings through his service as a Ward Clerk, Stake Clerk, Bishop and teacher.

Gerry is survived by his children; Steve (Michele), Darin (Ingrid), Kristine (Scott) Howes, Rick (Tricia) and Ron, as well as 18 grandchildren and 14 great-grandchildren. Preceding him in death are his wife, parents and sister, Barbara Wickham Coleman.

The family would like to thank the staff at Fairfield Village Rehab and Assisted Living Centers, and also Summit Hospice for their loving care of Gerry for the last few months of his life.

To order memorial trees or send flowers to the family in memory of Gerald Bettridge, please visit our flower store.
Send a Sympathy Card