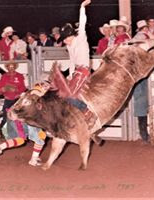 REDMOND - On January 3rd, 2018 Glen Owen dropped down in the bucking chute and took hold of his bullrope for one last go-round. He never lost heart, he never broke weak, he got up on his rope and dug in deep.

Glen was born with a bicuspid aorta that never caused him problems until November 28th of last year. He battled for five weeks working with doctors at the U of U to get his heart strong enough to endure open heart surgery.  He had a very successful heart surgery on January 2nd but in the end it was God's call. The following morning he suffered a massive stroke that was irrepairable.

Glen was born on October 20, 1969 in Mesa, Arizona to Pete and Barbara Owen. He had two brothers and two sisters.

Glen graduated from North Seveir High School with the Class of 1987.  He moved to Arizona after graduation where he met and married Heather Yancy. They had four children Zac, Erika, Dusty, and Bo.

At 48 he had lived well beyond his 48 years. He lived two lifetimes which is not so extraordinary for one given a double portion of grace, passion and imagination. His gifts annointed by God, were made manifest when inspired. His was a life both admired and criticised but mostly misunderstood. Such a gift requires a sense of freedom that is quite unconventional and there are those would say he was lacking. However, to have lived the life he'd been given in any other way would be to take away the color and over shadow all evidence to the  miraculous design of his Creator.

In one life he had a gentle touch and a still small voice that would captivate the will of a wild animal, instilling trust; producing a foundation for a functional and fulfilling relationship; one that was as rewarding as it was productive, a bond of unity and respect where he only spoke with a whisper.

His other life was neither mild nor tame. Rather it was wild and fierce like the love of Jesus for those who are lost. His soul desire was to show people  how incredibly loved they were, to tell them about Jesus and have the opportunity to introduce the two. He was not perfect but he was the most real person that I, as his sister, have ever known. As a brother and a friend he took great joy in being a witness to the dawn of understanding in the eyes of his fellow man when they came face to face with their Savior.

He was a unique and peculiar man of God. Called to a people often as misunderstood as himself. Now he's taken the higher ground and can see the big picture more clearly. He now stands with those in untainted worship to God and unfettered prayer for you, those whom he was called to proclaim the Truth...Jesus Christ and Him crucified. If you would honor him he would say,

"grow your faith, seek truth as found in God's word, never give up, and don't back down. I love you and I'll be seein' all ya'll on the otherside. GodSword!"

He was preceded in death by his brother James Kelly Owen and his mother Barbara Owen.

The family would like to extend special thanks to the staff of the University of Utah who diligently worked to restore health and life to his body and who served both he and his family with compassion and respect.

Services will be held Saturday, January 20, 2018, at 10:30 a.m. at Sevier Valley Baptist Church, 501 North Main, Richfield. There will be a gathering and lunch for friends and family following services in the fellowship hall of the church.

"Ridin' hard on a brute that can't be broke

without the sweat and dust of earth

on which we spit and choke

And wind it down with the blaze of a setting sun

With no thought of how we'd finish

Cause we've only just begun"

Guest book, pictures, obituary, flowers and gifts can be found at serenicare.com

To order memorial trees or send flowers to the family in memory of Glen Owen, please visit our flower store.