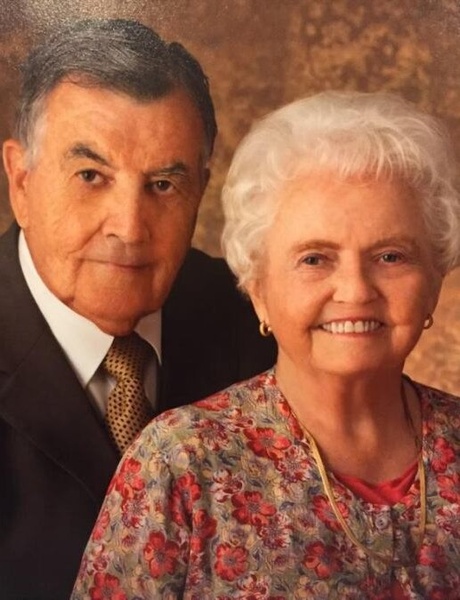 Gordon DeLong Evans passed away Sunday May 16, 2021 six days after his 95th birthday. Surrounded by loved ones, he peacefully took his last breath and joined his beautiful wife Bonnie Evans, an event he was looking forward to since her death in 2016. They shared an eternal love and as a family we are happy they have been reunited.

Gordon was born to Elizabeth DeLong and Jesse W. Evans in Panguitch, Utah on May 10th, 1926. Although his parents divorced shortly after his birth, Gordon was loved and nurtured by many wonderful people. His grandparents Mary Ellen and Albert DeLong Jr. were very influential in his life. He also learned so much from his step father Clarence Judd. He is preceded in death by his brother DeMont Judd and his stepsisters, LaRae, Cleo, Janice, Helen. We all loved to hear Dad’s stories of when he was a child and the mischief he would sometimes get into, from Boston Baked Beans, stealing baby lambs, Christmas day roller skating adventures, Strip his stubborn mustang, farting on bread and the time he cut off a cows tail.

As a teenager, Gordon’s family relocated to Salt Lake City, Utah. He graduated from West High School and shortly after joined the Navy during World War II. He was stationed on the USS Vogelgesang. His dedication and patriotism to the United States of America was deep. As his children we all learned respect and duty to our country. Gordon served the state of Utah by being the director of Fire Training. He served his city as Captain of the Salt Lake City Fire Department. He served in the community by working with VITA and TCA as a volunteer tax consultant for eleven years. He also loved and served in the Church of Jesus Christ of Latter Day Saints in numerous callings including Bishop, High Council, two church service missions with the most beautiful companion ever, his wonderful wife Bonnie. Our dad frequently would say to us, “You’d be surprised how much you can accomplish if you don’t care who gets the credit.” His selfless way of serving others and truly doing good wherever he was, was one of his best traits. If there was a stranded motorist, a lost soul, a person in need, Dad was there to help them, no judgment just a pat on the back and a place to call home if needed. If anyone offered to pay him for his kind service, he would decline and sometimes say, “Nope, just know a ‘Mormon’ helped you.”

He dearly loved his wife Bonnie. They have been an example of true love since their marriage on March 20, 1950 in the Salt Lake City Temple. Bonnie asked Gordon if they could get married in the temple, as it was important to her. At this time, Gordon only held the office of Teacher. As he tells it, “I was given the girl of my dreams and the first request she had of me was to get married in the temple and she wanted to be sealed to me forever and I told her no.  That wasn’t right! So I spent the next few months getting ready to take Bonnie to the temple.” From then on they were faithful and taught their family to be dedicated to the gospel as well. Gordon would often brag that all five of his kids served missions in various capacities. We are so thankful for the covenants they made in the temple so that we can be an eternal family.

To be around Gordon was to feel loved. His children, grand children and great grand children knew they were special to him in many different ways. If you were sad, he could get you to smile with just a mere chant about a stick and a staff. He was quite a magical grandpa and could pull a quarter out of anyones ear. If you were struggling he always had great counsel. He would say to us, “Advice is cheap, therefore it’s usually worthless, but if it doesn’t cost you anything you may as well listen.” We all will miss the free but invaluable advice he wisely gave us. We will also miss the clever nicknames and special songs he would sing to us. Even at the end of his life, he used his amazing voice to cheer us up and let us know we were loved.

Gordon loved to fish. This was another way he would show people that he loved them. No matter the age Gordon would take people fishing and could usually guarantee they’d catch a fish. However if you didn’t catch anything that was ok because a “bad day fishing was better than a good day at work.” If you wanted to see Gordon’s eyes light up, just ask him about some of the fish he helped people catch. He would even help people clean it and fry it up. If you got skunked, that was ok, he’d feed you anyway with a bowl of his famous watered down chili and a cold Diet Coke.

There wasn’t a thing Gordon couldn’t do. He could fix it, build it, read it, sing it, or laugh at it. If he didn’t know how to do something, he would figure it out. We as his family were lucky to be working right along side him. However there is one thing he couldn’t do, if he had to fix something, he’d dump out an entire number 10 can of various sizes of screws. Once the right screw was found, we as his children were told “pick up the pile of screws.” We didn’t love that job, but we would all kneel down and start gathering them up. It was just nice to be next to the person we thought was probably the smartest man alive.

Gordon leaves behind and incredible posterity. He told us often that we were all gifts from our Heavenly Father and once you were apart of his family, you were considered one of his children or grand children. He is survived by Gordon K. and Valarie Evans, L. Cory and Markae Evans, Martie and John Breivik, Curtis and Julie Evans, Melissa and Sam DeLong. Nineteen grandchildren, eleven grandchildren in laws, thirty two great grand children with two on the way. This was Gordon’s greatest legacy.

Gordon and Bonnie loved to travel and spent countless hours driving to places and experiencing the world together. At the beginning of every trip they would sing the song, “On the Road Again” by Willie Nelson. We know that Gordon is just on to his next adventure, the “life [he] loved was making music with his friends” and we know that he and our mom are reunited and truly “on the road again.” Thank you for everything you’ve taught us, how you brought us together and how we always felt so loved. We love you Dad, Papa, friend too all; you truly are great man!

The funeral service was live streamed and can be viewed on the link below.

To order memorial trees or send flowers to the family in memory of Gordon DeLong Evans, please visit our flower store.