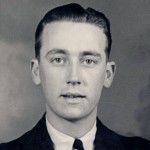 Ian Head passed away on January 29, 2013 to be reunited with his wife after a brief separation. He was born February 4, 1927 in Plymouth, England, son of Walter Head and Bertha Pook. After quitting school at a young age, he joined the British Navy in World War II. He married and had three children (Graham, Katrina, and Jeremy). At the age of 37 he was baptized a member of the Church of Jesus Christ of Latter Day Saints. He later divorced and years later met and married Janet Terry. They married on September 7, 1979 in the Provo LDS Temple.

He was a hardworking man, running his own business once he moved to the United States in 1987. He rarely took a day off and worked up until just a few years ago when his age and health prevented him from working. He loved the gospel and his family. He served in various church callings, including high priest group leader and gospel doctrine teacher. He was a dedicated home teacher. He did not receive much of a formal education, but spent much his time reading books about church doctrine and the scriptures. Most of all, he loved to spend time with his family. Ian is survived by his children, Graham (Glynis), Katrina, Richard (Melissa), David, Sarah (Noah); sister, Wanda; and his grandchildren. He is preceded in death by his beloved wife, Janet; his son, Jeremy; parents, brothers, and sister. A graveside service at East Lawn Memorial Hills Cemetery will be held on Saturday, February 2, 2013 at 1:00 PM. Family and close friends are invited to attend. His family would like to thank Hunter Hollow Rocky Mountain Care Center for their care during his final months.
To order memorial trees or send flowers to the family in memory of Ian Head, please visit our flower store.