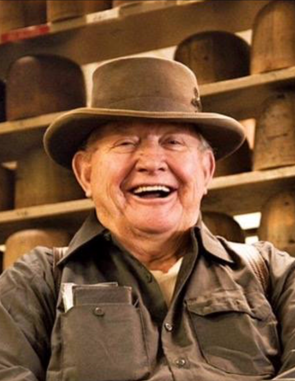 James Clyn Whittington, “JW the Hat Man,” passed away at home in Salt Lake City, Utah on November 9, 2017 after sustaining a concussion in September. His beloved wife was by his side.

Born on March 10, 1936 to Clarence “Bill” Whittington and Addie (West) Whittington in Fort Sumner, New Mexico, JW served in the US Army in Germany during the Korean War. After returning home, he married Estella Houston and together they had two children, Esther (Pete) Sarceda of Salt Lake City, UT and David (DoraLee) Whittington of Pomona, KS. They later divorced.

JW was a crew supervisor for the JW Jones company and was instrumental in the construction of many of the interstate highways throughout New Mexico. He lived in Alaska and was married to Ina Tumboras Graham and adopted her two sons, Michael and Robert. Ina and JW later divorced. Both his adopted sons preceded JW in death.

After his relocation to Utah, he then married Joyce Annetta Upshaw and was a stepfather to her son, Kenneth Otis Parker. Joyce passed away in February 2014.

JW started JW Hats in 1975, continuing the hat making business originally started by Brigham Young and John Charles Tatton in the 1860’s. A true visionary in the hat making industry, JW designed and manufactured equipment and supplies for hat makers throughout the world, as well as assisting with the establishment of the hat making class at Salt Lake Community College. He designed western style hats for use in several films, including the iconic hat worn by Robert Duvall in “Lonesome Dove.” Many celebrity hat makers popular today trained and served an apprenticeship under JW’s exacting tutelage.

JW was preceded in death by his parents, Bill and Addie Whittington and a brother, Larry Whittington.

A scholarship is being set up in JW’s name at Salt Lake Community College to benefit the hat making program.

A memorial service will be held at Antelope Island, UT in the spring of 2018.

To order memorial trees or send flowers to the family in memory of James Clyn Whittington, please visit our flower store.