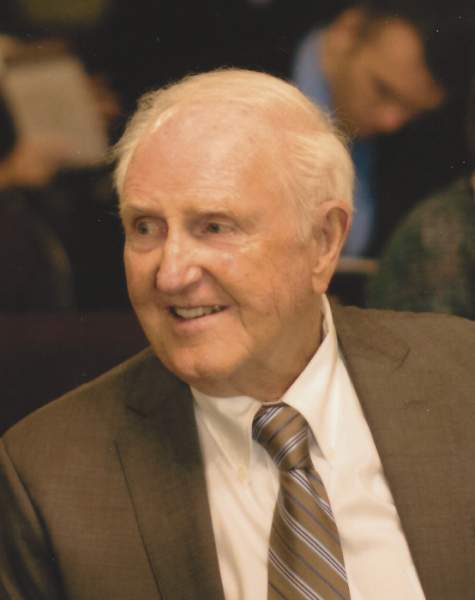 Jay was born to Blanche & Clarence Brown on June 12, 1928 in Smithfield, Utah. He was the oldest of 10 children, whom he was very involved in raising for many years.

At age 8, Jay began working as an apartment building janitor. He also sold newspapers as a young boy. After being tutored by his father, Jay began running the projection equipment for movies at the Main theater in Smithfield at the age of 11. Additionally, he worked at the Center, Uptown and Capitol theatres in SLC, the Grand theatre in Preston, Idaho and the Roxie theatre in Logan. He also traveled with his dad showing movies in LDS building cultural halls in Idaho, Utah and Wyoming, and worked in the theater circuit in Bear Lake and Wyoming.

Along with showing movies at night, Jay harvested wheat in Clarkston, Utah. He also worked in a pea factory in Smithfield and at age 15, he began working as a pressman at the Cache America newspaper company.
After the theater circuit, Jay worked at a record company in L.A. followed by a job in the shipyards in Oakland, CA.

Jay joined the army in 1946 and was stationed in Korea where he was very fortunate to be given the position of movie projectionist in the division of special services. Jay supervised the building of a cement projection booth and installed all the equipment, providing a first class movie theatre for the troops serving in Korea.

After an honorable discharge from the army, Jay worked at Brown Floral and then at Wolter’s Electric company, the job that sparked his interest in electronics. Following these jobs, Jay began engineering the installation of drive-in movie theaters in Blackfoot and Coeur d’Alene, Idaho and Kalispell, Montana.

In 1949, Jay married Jean Lindblade and together they had four children, Mark, Kevin, Craig and Cindy. After Jay’s parents passed away at a young age, Jay and four of his brothers and sisters each took and raised one of the younger five siblings. Jay and Jean raised his sister Linda. The marriage ended after 23 years.

Jay and a partner began a television servicing business called Electronic Craftsman. Along with this job, and installing outdoor movie theatres, he enrolled in an electronics school. He received a degree after 3 years.

Jay then worked at UNIVAC as a test engineer and senior lab tech during the same time he was running his TV service business. Simultaneously, Jay also began his own calibration lab called Stabro labs. The lab became very successful and expanded to Minneapolis, Montana and Denver. Jay was CEO of this company for 27 years. During this time, Jay married Margaret Solem. He helped raise her children, Eric and Laura. They later divorced.

After retiring from Stabro labs, Jay started a small video company called Alta Productions, and then later began a video and audio editing company called Academy Telecine Productions. Some of the first video productions were Reaching for Repertoire, Beginning Keyboard and Ski Utah, a promotional video. This was a business he truly enjoyed. It was during this time he met his soul mate, pianist and university professor, Lenora Ford Neal. They were business partners for three years, working on video productions, before they started dating. They were married in 1989 and enjoyed 26 wonderful years together. They worked together on many projects and Jay edited
numerous videos, and produced over 22 compact discs of Lenora’s playing. Additionally, he produced 5 piano arrangement books that are currently marketed worldwide. Jay was also a wonderful father to Lenora’s three children, Laura, Heather and Evan.

Jay loved traveling, reading and learning about new technology, working in his editing room,
spending time with his family and friends and watching movies. He was able to repair anything
and was a genius on many levels.

Jay was loved by everyone that met him. He loved children and they were drawn to him like a
magnet. He had a huge heart and an amazing spirit that radiated wherever he went. He was a
generous, kind, loving, Christ-like soul who will be greatly missed.

Jay was diagnosed with bladder cancer in 2014. It went into remission for several months, but
unfortunately metastasized to his lungs in the summer of 2015. He fought it with every fiber of
his being. He was cared for lovingly by his family, and passed away with loved ones
surrounding him.

The family would like to thank Rocky Mountain Hospice care for the loving care they provided
and all the friends and acquaintances that were so supportive during the past months.

To order memorial trees or send flowers to the family in memory of Jay Clarence Brown, please visit our flower store.