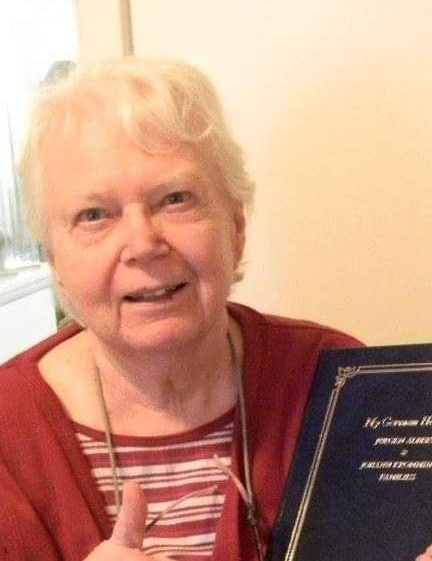 Georgia Joanne Alberts Schell returned home after completing her mission here on earth on April 30, 2019. Joanne was born May 23, 1936 to Joe and Marian Stoddard Alberts. The family lived in South Dakota until 1947 when they moved to Spokane, Washington. She attended Garfield Elementary and North Central high school.

Joanne was an avid family history researcher for over 50 years. She was a volunteer at the Syracuse/Clearfield Family History Center for 25 years. She published three books. One each for her mother and father’s lines and her own autobiography. She served 17 years in Junior Sunday school as a teacher and coordinator. Other church callings included the relief Society president, ward and steak family history consultant, and primary teacher at the age of 78.

Joanne was also active in the Association for Retarded Citizens for several years. She served as County President twice and as Utah State President. Joanne was very involved with many others in lobbying the Legislature, both local and national, for the Handicapped Citizens Act in the 1980s. She also helped raise the money to open the first group home for the mentally disabled and Utah.

Joanne is survived by her husband, Bob; her daughters, Cindy Fisher and Margie (Kevin)Kinney; five grandchildren; 12 great-grandchildren; one great-great-grandson; her brothers: Gene (Pris), Tom (Sue), George (Jutta), Phil (Dona), and Paul; and her sister, Rev. Doris Alberts.  She is now having a great reunion with her parents; her two daughters, Linda and Patty; her brothers: David, Jack, and Richard; and great grandson, Braxton.

To order memorial trees or send flowers to the family in memory of Joanne Schell, please visit our flower store.
Send a Sympathy Card