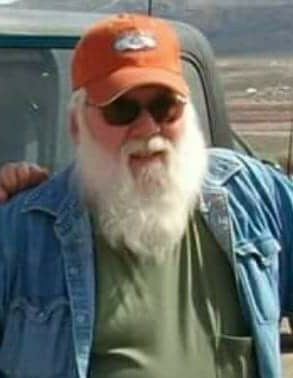 John Culver, 67, of Elko, Nevada passed away on December, 27 2017, surrounded by family at the University of Utah Hospital.

John was born in San Jose, California on May, 10, 1950 to Emery and Virginia Culver. He graduated from William C. Overfelt High School in San Jose. It took them a while to find each other, but he was hitched to his beloved Henri (also from San Jose) on December, 19 1982 and was married for 34 years. He survived her passing April, 13 2011 and is now comfortably in her arms, dancing the days away to some true bluegrass.

John worked behind the wheel of numerous machines with a white beard and gold rim glasses eating pavement miles for more than forty years without a single accident. Though he had an incredible smile, and would look quite jolly when he did shoot one, you never asked that man to dress as Santa. John scared off many with his gruff exterior, but that is how he weeded through those worth knowing, since only those that gave him the time found out he had a heart of gold. He was a driving force behind the Elko County Range Facility and was involved deeply in Northeastern Nevada Rifle and Pistol Association and E Clampus Vitus, as well as various other organizations.

He is survived by his step-son Dennis Marsh, step-daughter Janet Marsh, daughter Elizabeth (Anise) Ben James, daughter Seanne (Matthew) House, 9 grandchildren, and other family and friends. John will be deeply missed, but will be thought about at every gun match, baseball game, and with every cup of coffee.

By the way, none of these numbers are the combination to his gun safe!

The family would like to thank the hospital staff at the U of U on the Acute Medical Unit and the Medical Intensive Care Unit, for their persistence, care, compassion, and fondness of John.

To order memorial trees or send flowers to the family in memory of John Culver, please visit our flower store.
Send a Sympathy Card