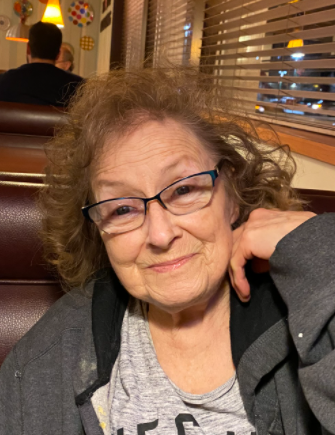 Karen Doyle, a loving mother, grandmother, great-grandmother, sister, cousin, and daughter returned home to her Heavenly Father and youngest son, Bret on October 20, 2020 at her oldest son’s home in Utah. On February 13, 1948 Karen was born in Stillwater, OK and later adopted by her beloved parents, Glendon and Elaine Brown from Pond Creek, OK at the age of seven. She grew up in Pond Creek and after graduating high school at Pond Creek – Hunter she later attended some college.

Karen married Patrick Doyle in 1968 and they had two sons Jay and Bret who she loved with all her heart. After her divorce in 1972, Karen worked hard long hours to raise her two boys as a single mom. Karen had a great spontaneous smile, good sense of humor, and was known for her willingness to go visit, serve, and help take care of people in need, regardless of her own health or wellbeing. Throughout her adult life, Karen stayed in touch with her classmates, childhood friends and family from her hometown of Pond Creek. Karen always spoke so highly of her childhood friends and family from her hometown. There are too many to respectfully mention here, but some of her most cherished memories and friendships were growing up with Kathy Scott, Anita Cribly, Ann Melott, Claudia Newman, Cheryl Breckenridge, and her Cousin Jo Ellen Reed. Most of her family and friends would agree that she always had a sweet tooth.

We love and will miss Karen; however, her memory will live on forever.

To order memorial trees or send flowers to the family in memory of Karen Doyle, please visit our flower store.
Send a Sympathy Card