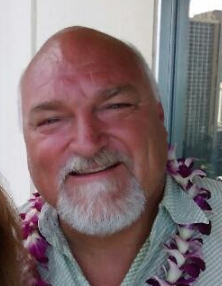 Kenneth Francis Webb died suddenly at his home in Orem, Utah on Tuesday, December 10, 2019. Kenneth was born on August 30,1960 in Burbank, California to Francis Adelbert Webb and Irena Beth Richardson. When he was six he moved to Provo with his family, while his parents both worked for BYU.

Ken attended Provo High and graduated with the first graduating class from Timpview High School. In fact, Ken scored the first touchdown in Timpview history. He always said they should put a statue of him in front of the school for that.

He loved sports. He played football, basketball, and baseball in high school. He also loved waterskiing, snow skiing, and tennis. After graduating, he went on to play football at Dixie State. He also attended BYU and Fresno State.

He then had the opportunity to serve as a missionary in Bangkok, Thailand. Because he was called as Assistant to the Mission President, he was able to train the new Mission President coming in, and got to travel to places in Thailand where no other missionary got to go. It was one of the best experiences of his life.

He went on to play football for Dixie State, then attended BYU, Fresno State and UVU, majoring in computer science.

Ken had four children, first three boys, Brock Francis, Cadin Kenneth, and Kimmer James, and finally his little girl, Bailee Suzanne (his princess). They were the joy of his life.

After owning his own businesses, Ken moved on to computer programming at UVU. He first started at Word Perfect, then Novell, Microsoft, and finally Health Equity. He was a numbers guy, a hard worker, an artist, and a people person. He loved his work and he loved the people he worked with.

Ken married his college sweetheart, Lora Valentine. They met at BYU and then followed her to Fresno, where he attended Fresno State. They were sealed in the Saint George Temple. She was his soul-mate, the love of his life. They did everything together. They were inseparable.

Ken loved serving others, in and out of the church. He really enjoyed his final calling as Family History Coordinator and Consultant. If anyone ever needed a hand, Ken was always there to help. He had a big heart, not just for people, but also for animals. Throughout his life he almost always had an animal at his side.

Ken’s great loves were his family, sports, music, and traveling. He was a big fan of the Seattle Seahawks, along with BYU football and basketball. He also enjoyed traveling, especially to warm places with an ocean.

But what we’re going to miss most about Ken is his zest for life and the joy he brought into the lives of the people around him. He was always making people smile, making people laugh, bringing joy and laughter into everyone’s lives, spreading fun and enjoyment everywhere he went. He will be greatly missed. We love you Ken.

Funeral services will be at 10:00 AM on Saturday, December 14, 2019 at the Church of Jesus Christ of Latter Day Saints, 165 East 1750 North, Orem. A time of visitation will be at the church on Saturday from 9:00 AM until the time of the service. Interment will be in Orem City Cemetery.

To order memorial trees or send flowers to the family in memory of Kenneth Francis Webb, please visit our flower store.
Send a Sympathy Card