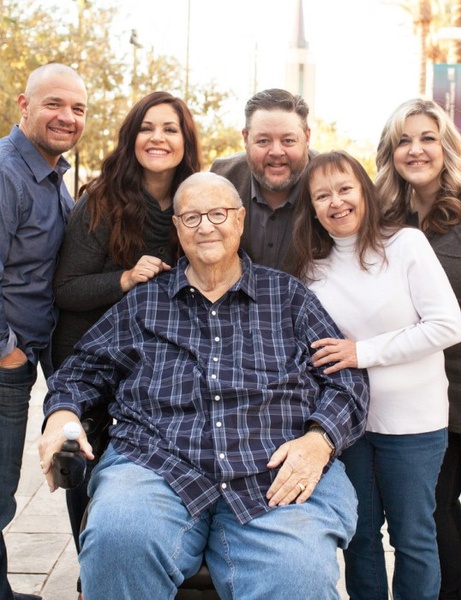 On August 16, 1947 in Glendale, California, Lane Brian Smith was born. His parents, Lyle Harrison and Ardis (Knudsen) Smith, had no idea the great man Dad would become.

Growing up in Vista, California, Dad was, as his brother, Kent, put it, "larger than life." The fact is that he was larger than just about anyone else his age. He was, as they say, a gentle giant. He was kind to everyone around and that attitude exemplified his life.

The young Smith family was often amid meager circumstances. His mother was very adept at providing the children opportunities to enjoy life where little money was required such as creating their very own carnival. She would provide them with the money to buy tickets then would sell tickets to them so they could participate.

Dad would often tell a story (facts may or may not have any basis in reality) of being so poor that they could only afford four pork chops for their five growing boys. The blessing was offered on the food. Amen was said. Five forks went into the middle of the table. After a pause, Dad would say, "And boy, the two I had were great!"

Given Dad's size, you'd think he would be amazing at sports. Both with height and weight, he would be the right size to simply dominate sports requiring physical prowess. When his children were teenagers, one of those children (who shall remain nameless) broke his (or her) arm (maybe for the third time) the discussion came to Dad's relationship with sports. Knowing that he really wasn't that interested, ever, he indicated that he broke his arm playing football.

Much to the amazement of his children, they begged for more information. No way could this man, who never cared to even watch a sportsball game actually have played ball. But, sure as anything, he played… in high school PE. And it was flag football. And he fell off the bench.

His other relationship with sports was being named the manager for the high school football team. Now, that simply meant that he just ran errands for the "real" football players and kept track of their equipment, uniforms, and made sure they stayed hydrated.

After high school, Dad was called to serve as a missionary for The Church of Jesus Christ of Latter-Day Saints to the Pacific Northwest Mission which included Washington, Oregon, Idaho and small parts of Montana and Wyoming. He served faithfully for two years from 1966-1968. Upon returning home, he had reached his full physical stature of 6' 6" with the weight to match. During the homecoming address in sacrament meeting, there was another, much smaller missionary leaving for his mission. As Dad's father stood to address the congregation, he asked these two young men to stand. In full Smith fashion, he simply said, "Brothers and Sisters, I give you the before and the after."

In 1969, Dad enlisted in the Air Force. He always said that he enlisted to avoid the draft. As an airman, his focus was on recruiting and marketing. As he had some musical experience playing the trumpet, he was asked, shortly after joining, to play the Tuba for the Airforce band. Shortly thereafter, he was instructed to conduct the band. Though he didn't have any experience conducting, they figured that since his father was a conductor that he could surely do it (and don't call him Shirley). He enjoyed working with the band and used the skills learned there often in church. A common calling for Dad was choir director and he was very well suited for it.

While in the Air Force, he met Pamela DiAnn Fulmer. In March 1971, they were married in the Salt Lake Temple. They lived in Texas and had a driving honeymoon on their way back home. Over the next 15 years, they had five children: Lane, Christy (who passed away after 1 day), Corey, Jillian, and Christina (not in order of greatness, but age).

As we were growing up, he made a great Santa Claus and filled that role many times throughout his life. He could always make every child that sat on his knee feel like he knew them personally. With Dad's uncanny sense of humor, he was never afraid of changing his appearance if he could either make someone happy or embarrass someone. Whether he wore a flowing evening gown to embarrass a son on a date, wore a fruit hat and dress as Carmen Miranda … I mean Mi-Lane-a …  the world's largest Macarena dancer, or as Grover Cleveland for his daughter's school presentation, he was all in on his various roles in life.

Dad always had the attitude that he could do anything… he just had to figure it out. As Vice President of Corporate Communications for Bergen Brunswick, he had to learn a lot. Though he didn't have a degree, he had taken coursework in rhetorical theory and communications in college. He would take those basic skills and expand at every opportunity. One story he would tell would be that his boss came to him early in his career. Dad was asked if he could create slides for a presentation. Rather than looking bad, Dad simply told his boss that he could do it. That evening he went to the local photo store and spent a few hours learning everything he needed to know about slides. He was always very resourceful and would use this same approach in anything he undertook.

After Dad and Pamela separated he met Patricia. She was very patient with him and even though he married someone else (who shall remain nameless for very selfish reasons), she waited until he was ready for her. On December 26, 1996, Dad married Patricia in Laguna Niguel, California. Stuart, Lisa and Steven (Patricia's children) were added to the family. Dad treated and cared for them as if they were his own. He never viewed them as Patricia's children but as their children. On April 12, 2007, Dad and Patricia were sealed in the Jordan River Utah Temple.

The reality is that Dad cared for everyone. In fact, if he didn't like you, you probably wouldn't have known. But, those that he really liked, he knew how to maintain relationships for years. Time or physical distance meant nothing when it came to relationships with Dad. He knew how to make everyone who was near him comfortable and feel great about themselves. He would always find little ways to show people he cared.

You could say that Dad was a hobby entrepreneur. He often found ways to earn an extra buck. In fact, two things he would often say would be, "I'll do anything for money" and "I can do anything, it just takes time." As young children, we would help him grow strawberry starts in hydroponic planters for the swap meet (and sell a variety of other things there as well) or help him set up a BBQ stand for city events. Later he started a printing company and then another and then another. He worked fairs and other events selling kettle corn or funnel cakes. It didn't matter if it was hard or if he didn't know how to do it. He would take the time needed to figure it out and make it happen.

The combination of Dad's care for others, that entrepreneurial spirit, and his willingness to just figure things out led him to start Serenicare Funeral Homes in 1999. When his step-father, George Voitlander died, he realized there was an opportunity to help people that were being taken advantage of at their most vulnerable. He crushed the establishment of the funeral business. He made enemies of those that would take advantage of people but helped literally thousands of families at their time of need. At one point, Serenicare was the fastest growing funeral service provider in the United States and among the largest in Utah. The business model of Serenicare has since been replicated by others due to its success, continuing to help even more families that never had an opportunity to meet him. Just one of many aspects of the legacy Dad has left behind.

To understand the type of man Dad was, his lovely bride, Patricia wrote the following in 2008:

I love my husband! We have fun together and with our families. He loves to play Santa at Christmas time; he loves woodworking and barbecuing.

He is my soulmate and friend. Everybody loves him.

When I was sick with cancer, he was by my side every step of the way, even taking me to all my treatments and staying there until they were finished.

He is a wonderful father and grandfather. The little kids adore him as well as his children.

I enjoy his humor, but now that he's saying things in his priesthood meetings about the latest "Pattyisms" (the pledge story is still one of the favorites), just believe half of what you hear.

He works in an industry that he is well-suited for. He is wonderful with the families and makes them feel cared for. He started his funeral home 9 years ago from nothing and, with a little help from me of course, he built it into a very successful company.

I am glad he is my eternal companion and I love him dearly.

Less than 10 years after she wrote that, she passed away after suffering the devastating effects of dementia. Even during the most difficult times at the end of her life, he stayed near her. Never was there a better example of a caregiver.

In his final years, he owned and operated Red Rock Glass in St. George. While Dad worked hard to create this new business, he truly felt joy in helping people and building relationships. As his children were concerned about him being far from family after the death of Patricia, we had to acknowledge that the relationships he built in St. George were every bit as strong as the bonds of blood.

Often, it's hyperbolic to say of people that they lived an amazing life. It's not hyperbolic or an exaggeration to say that about Dad. Dad was a spiritual giant of a man in a physical giant of a frame. He lived as an example to all those around him. His kindness, ethics, humor, and genuine care will be missed by all those who knew him. He will not be easily forgotten and his influence will be felt for generations to come.

He is preceded in death by his wife, Patricia and her son, Stuart Moroz, and his brothers, Craig and Nyle. He is survived by his children, Lane, Corey, Jillian (Rigtrup), Christina (Bird), Lisa (Moss), Steven (Moroz) and his brothers, Kent and Barry.

To view his graveside service on Friday, February 19, 2021 at 10:00am MST go to http://ceremony.lanebsmith.com

Please join the Facebook group for Lane B Smith to see updates and the sharing of additional stories. Go to http://lanebsmith.com

To order memorial trees or send flowers to the family in memory of Lane Brian Smith, please visit our flower store.