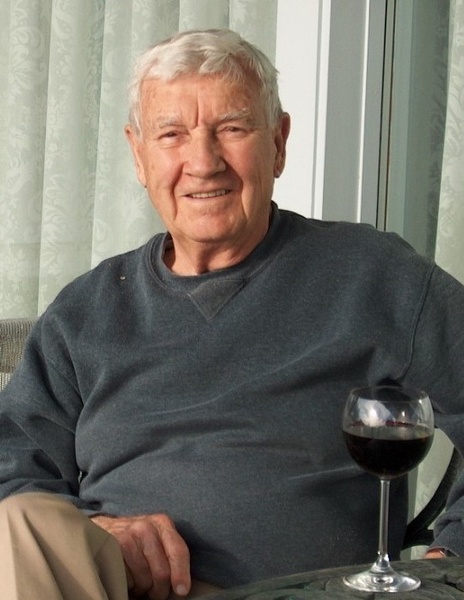 Dr. Lloyd E. McCleary, who was known as Mac, passed away at the age of 94 on February 18, 2019. He died at home in Salt Lake City in the arms of his loving wife. Mac was born May 10, 1924 in Bradley, Illinois to Pearl and Hal McCleary. He earned a Ph.D. in Educational Administration at the University of Illinois in 1957. He joined the faculty at the U of I in 1959 and became Department Chairman there before taking the position of Department Chair at the University of Utah in 1969. He retired in 1994 as Professor Emeritus.

Mac enlisted in the U.S. Army in 1942. He served four years on active duty and 10 years in the Army Reserves. During active service, he served two years in the European Theater during World War II with the 222d Infantry Regiment, 42nd Infantry (Rainbow) Division. He participated in Campaigns in France, Rhineland, and Germany. He received a battlefield commission to Second Lieutenant and later a field promotion to First Lieutenant. He was an operations officer when his unit seized the Dachau Concentration Camp and liberated its prisoners. His military decorations included Bronze Star with Valor, European-African-Middle Eastern Campaign Medal, World War II Victory Medal, World War II Occupation Medal, Presidential Unit Citation, and Combat Infantryman Badge.

Mac was a prolific author and researcher with numerous books, journal articles and research reports. Mac’s career encompassed a wide range of activities from university professor to international work for the Department of State, USAID, UNESCO and numerous other associations, too many to mention. He was awarded the S.D. Shankland Memorial Fellowship in 1956. As Associate of the Kettering Foundation and Fellow of the Institute for International Development, Mac engaged in research and development projects in Latin America, Asia and the United States. He was awarded the Hatch Prize for Excellence in Teaching at the University of Utah in 1988. He served as consultant to the Office of the Queen of Jordan, Queen Noor. His list of contributions included keynote speaker for numerous international conferences in Africa, Asia, Europe and Latin America. He was a leader in research and development in the National Association of Secondary School Principals and gave the Lloyd Trump lecture at the NASSP National Convention in 1992.

Mac had a great love of the outdoors and nature including gardening, hiking, wildlife, and visiting archaeological sites throughout the state. He was an avid runner until his late 70s. After retirement, he was a volunteer, advocate, and photographer for Tracy Aviary. He maintained an active physical regimen at the University Orthopedic Center, where he developed many friendships. He continued playing bridge, having coffee with friends and maintaining communication with many former students and colleagues of over 50 years. Mac continued to write on a wide range of topics. He was an example of lifelong learning. Even after numerous health issues, he continued in his search for knowledge and was always interested in a good discussion.

Mac was truly a renaissance man and always exhibited equanimity. He was the epitome of patience, always ready to listen and help when needed. Mac has left an invaluable legacy of positive influence on many lives through his mentorship, inspiration and life examples. He was an extraordinary husband, father, professor and friend.

To order memorial trees or send flowers to the family in memory of Lloyd E McCleary, please visit our flower store.