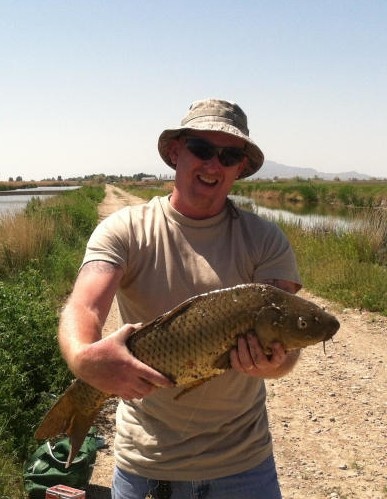 Lucky (Luck) R. Funderburg, 41, retired US Air Force TSgt,  passed away October 25, 2017 at McKay-Dee hospital in Ogden Utah. Luck was born January 19, 1976 in Portland Oregon to Syndee Ellerd Wrakestraw and Gil Funderburg. Luck graduated from Molalla High School, in Molalla Oregon in 1993. He joined the U.S Air Force in 1994.  Luck served almost 16 year before medically retiring in 2010 from Hill AFB. Since Luck’s retirement he continued to suffered from many combat-related injuries and illness which ultimately resulted in his death.

During his military career (Aircraft Maintenance Armament System)   he was stationed at numerous bases. His overseas tours included Germany, South Korea, and Japan. Stateside he was stationed in South Dakota, New Mexico, and Utah.  Luck served multiple deployments in support Operation Iraqi Freedom where he received numerous awards and accommodation.

On February 14, 1998, he married the love of his life, Heather Rowe in Rapid City, South Dakota, while he was stationed at Ellsworth AFB. They were to celebrate their 20th anniversary in February.   On January 30, 2007 they were blessed with the most amazing son, Lucky Jeremy Funderburg in Clovis, NM.

Luck was an American Hero, my best friend, husband, life partner and true love.  He was an amazing Father to Lil Lucky and his Hero. He was a million others things to us and we love him and miss him dearly. We will always cherish our time with him but know now he is no longer in pain. Luck is now our shining star watching over us.

The family loved to spend time traveling, Disney was one of their favorite destinations. They shared a love of Star Wars, Comic Con, and supporting their favorite football team, the Oregon Beavers.

Luck and his son Lucky, who shares his name, spent summers and holiday breaks having “Adventure Times” together.  The boys bonded over their love of video games and building Legos. But what they enjoyed the most was competing to see who could catch the most fish at their special fishing hole.

Even after his death, Luck continued to help other veterans. He requested to be part of a PTSD studies and with thanks to the National Posttraumatic Stress Disorder Brain Bank that wish was granted.

A Celebration of Life for our hero will be held at a later date in the Spring of 2018.

In lieu of flowers a memorial has been established in his name, for his son Lucky's college fund at America First Credit Union Acct. # 9097999.

To order memorial trees or send flowers to the family in memory of Lucky R Funderburg, please visit our flower store.