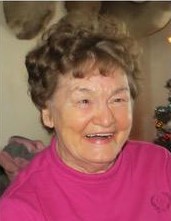 Marcia Griffith Salmela (d. 8 April 2017) will be remembered by her family and many friends for her courage, optimism and determination to live life to its fullest despite the challenge of an early onset of the progressively deteriorating muscle condition known as Cerebellar Ataxia.

Born in 1945 in Sheridan, Wyoming to Donald Vernon Griffith and Louise Burley Griffith, Marcia attended elementary and high schools there. She also received her A.A. degree at the Sheridan College. She earned her BA in Elementary Education (1967) at the University of Wyoming enabling her to teach pre-school at the Big Horn Elementary School.

While working as Librarian at the Wyoming State Hospital (1971-1973), Marcia met her future husband John (Bud) Salmela (d. 1998). They moved to Evanston, Wyoming where Marcia established many friendships and became a Sunday school teacher at the Calvary Baptist Church as she had done at the First Presbyterian Church Sheridan. In addition to her church affiliations, Marcia was a member of PEO chapters in Sheridan and Evanston, and Job’s Daughters Bethel 27.

A memorial for Marcia is planned for April 22 at Brookdale Senior Living, 76 South 500 East SLC, Utah 84102 at 11:00 am. SereniCare Funeral Home of Salt Lake City, Utah has been entrusted with the arrangements.

In lieu of flowers memorial contributions may be made to:

To order memorial trees or send flowers to the family in memory of Marcia Salmela, please visit our flower store.
Send a Sympathy Card