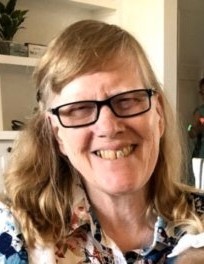 Our sweet mother, grandmother, sister, and friend Mary Rowley Mortensen finally accepted the invitation of her loving parents (both earthly and Heavenly) to return to her home on March 1, 2020.  She was born on June 2, 1955 in Pendleton, Oregon to William and Leona (Bahr) Rowley. Shortly after her birth it was identified that she was blind. Her father gave her a Priesthood blessing that she would have the sight necessary to raise a family and benefit the lives of others. She wrote, “My father always cared about me. He would not let my poor eyesight be used as an excuse. He would tell me to figure out a way to do whatever I needed or wanted to do.” She made it her life's work to teach others the same thing.

When she was young, her family moved to Rose Park where she grew up and loved the neighbors and friends. She worked at Rowley & Company, her father’s fruit and vegetable processing business for many years, trimming radishes, peeling onions, making celery sticks, and more. She graduated from West High School with honors. On October 25, 1974 she married Scotty H. Mortensen in the Salt Lake Temple. Even though as a child Mary said she only wanted grandchildren, not children, She and Scotty were blessed with six children: Francis, William, Venice, Troy, Emily, and Ryan; who then blessed her with 25 grandchildren.

A lover of music, Mary learned to play the piano, violin, and the accordian. Her children would often be found clutching their ears as she would play polkas loud enough for the whole neighborhood. When she could no longer play the violin or accordion, she would pick up other instruments. If a ward choir was started, you could be sure she would be one of the first volunteers. She loved being part of the “We Sing Too” choir directed by Merilee Webb.

Mary loved teaching children, as faithful member of the Church of Jesus Christ of Latter Day Saints, she served most of her life in the Primary. Of course there was the time when a Bishop was brave enough to call her as the Relief Society President, she served valiantly despite regularly asking when she was going to be put back where she belongs. Her favorite callings were as Primary Chorister, and Grandmother.

Mary has called many places home, some locations more than once: Rose Park; Roosevelt, Utah; Elmo, Utah; Kearns, Utah; West Jordan, Utah; Hagerman, Idaho; Gooding, Idaho; Taylorsville, Utah; West Valley, Utah; Beaver Dam, Arizona; Filer, Idaho; and a few other places in between. She left an impression on every place she lived no matter how long she lived there.

Her love of teaching children led her to volunteer and then become a teacher's aide at Westland Elementary. When she moved to Idaho she continued working as an aide for the Hagerman Schools. While in Hagerman she felt impressed to continue her schooling and dream of being a teacher. Shortly after her first grandchild was born, she graduated with honors from BYU with a degree in Elementary Education and took a position at the Idaho School for the Deaf and Blind. She continued with her education and received a Masters of Special Education from Portland State. After moving back to Utah to take care of her mother, she began working for the Utah School for the Deaf and Blind and blessed the lives of many visually imparred children. She ended her teaching career caring for and teaching some of the most precious children in a severely disabled visually impaired preschool position. Every student she ever came in contact with, knew that they were loved, special, and able to do more than anyone could imagine.

Throughout her life, Mary faced many physical challenges. In addition to being blind, her feet were pointed in the wrong direction at birth, this required breaking the bones in her legs, turning her feet and putting both legs in cast for most of the first year of her life. She endured meningitis as a youth and seemed to contract every childhood illness easily. The most challenging came in 1993 when she was first diagnosed with Melanoma on her left shoulder requiring surgery and many painful months of radiation. Everytime she would think that she finally beat cancer, a new tumor would appear. In addition to Melanoma, she underwent a whipple surgery to remove most of her pancreas when precancerous cells were found. In 2016 her left arm broke when one of her very young students gave her a hug and it was discovered that the Melanoma had metastasized and essentially dissolved the upper portion of her left humerus. The damaged bone was replaced with a titanium rod and miraculously she was able to maintain limited use of her left, dominant, hand. She did not give up and she did not let the limited use of her arm be an excuse, she figured out a way to do whatever she needed or wanted to do. It was when the treatment side effects became more burdensome than beneficial she decided it was time to stop and accept that it was time to graduate from her greatest learning experience.

A viewing will be held on Sunday, March 8th from 5-7:00pm at 840 W. Midway St. Filer, ID. There will be a viewing on Tuesday, March 10th from 9:30-11:00 at 1510 W. Parliament Ave, West Valley, UT. Funeral service will immediately follow. Interment will be in the Utah Veterans Memorial Park Cemetery.

To order memorial trees or send flowers to the family in memory of Mary Edith Mortensen, please visit our flower store.
Send a Sympathy Card