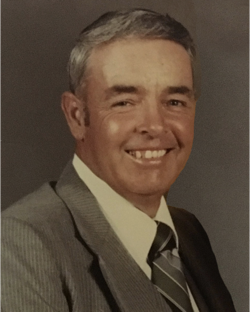 Neil Leonard Hepworth passed away May 14, 2017, at the VA Medical Center in Salt Lake City, Utah.  He died of natural causes at the age of 85.  Neil was born in Woods Cross, Utah to Jean L. Hepworth and Ethel B. Wilson on March 11, 1932.  He spent his childhood in West Bountiful until the age of 19.
He was drafted into the United States Army in 1952, where he served two years during the Korean War as a Technical Staff Sargent for the 50th Anti-Aircraft Artillery Battalion. During his service he received training in Chemical Biological Radiation Defense.  He was honorably discharged in 1954.
Upon his return from Korea, he met and married LeAnne Henderson in 1956 in the LDS Salt Lake Temple.  He made his living as a reputable Brick Mason for 37 years.  Neil served faithfully in many LDS church callings including several Bishoprics, as a member of the West Bountiful Stake High Council and then as a Bishop of the West Bountiful 5th Ward from 1978 - 1982.  He devoted many years to the LDS Extractions/Indexing program.
In 1985, Neil was elected as a West Bountiful City Councilman where he held public office for four years.  He was an avid outdoorsman who enjoyed hunting, fishing and camping.  He is survived by his wife LeAnne, son Mark (Cindy), daughters  Anne (Taz), Paula (David) and the joy of his life, 12 grandchildren and 11 great grandchildren.  He is grateful for the 7 spouses of his grandchildren who have added love and support to his family.
Funeral services will be held on May 20, 2017,  at 12:00 p.m. with a viewing from 10:00 a.m.-11:45 a.m. that morning at the LDS Ward House on 840 North and 800 West, West Bountiful, Utah. Interment in Bountiful City Cemetery.

To order memorial trees or send flowers to the family in memory of Neil Leonard Hepworth, please visit our flower store.
Send a Sympathy Card