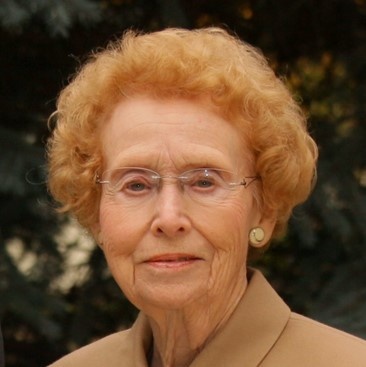 Olive May Peterson 94, passed away peacefully August 24, 2017 in Bountiful, UT. For the past 4 years she has resided at the Inn on Barton Creek assisted living in Bountiful where she was cared for by their excellent staff.

She was born May 8, 1923 in Missoula, MT to Amos and Rebecca Roseann Van Oss Chaffin. She grew up in Lolo and Missoula, MT, one of 7 children, graduated from Missoula County High School in 1941 and began working in secretarial work. She met her husband, John H. “Jack” Peterson, Jr. in Missoula and married July 3, 1943 while he was in cadet training as a pilot in the Army Air Corp during WWII. After the war, they settled in Missoula until his recall into the Air Force during the Korean war. Jack remained in the Air Force retiring in 1975 upon which they moved to Bountiful, UT.

Olive was a woman of many talents and loved playing the piano, oil painting, family history, and entertaining. She was a convert to The Church of Jesus Christ of Latter-day Saints and remained active filling many callings. After Jack’s retirement Olive served as a hostess on temple square, an ordinance worker in the Bountiful Temple and fulfilled two missions with her husband to Papua New Guinea and Australia.

To order memorial trees or send flowers to the family in memory of Olive May Peterson, please visit our flower store.
Send a Sympathy Card