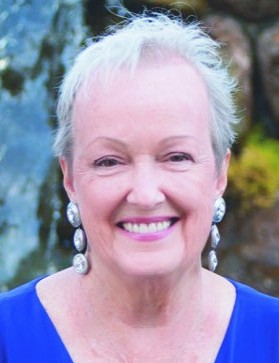 Our beloved wife, mother, grandmother and sister, Patricia Ann Smith, 78, (AKA The Princess Pat to her grandchildren - which they sang with great zeal!), passed away on Wednesday, June 6, 2018 following a long illness. She was born on November 25, 1939 in Bellaire, Ohio to Albert Ray Shafer and Rita Patricia Shafer. Patricia married Terrace Robert Moroz in 1960, later divorced. She married Lane Brian Smith, her eternal companion on December 26, 1996 in Laguna Niguel, later sealed on April 12, 2007 in the Jordan River Utah LDS Temple.

Patricia graduated from Tridelphia High School in Elm Grove, West Virginia. After moving at the age of 18 to Southern California, she went to the John Powers Modeling School where she learned the art of dressing beautifully, applying makeup and carrying herself with great elegance - which she did until the time of her passing. She worked as a transcriptionist for the Santa Ana Police Department and then St. Joseph Hospital in Orange, California. She earned her AA degree from Orange County College. She ended her working career after over 30 years as director of Medical Records at St. Joseph Hospital. An active member of the Church of Jesus Christ of Latter-Day Saints, Patricia served in many positions over the years. She loved serving in the Young Women's organization and the Relief Society. After marriage and retirement Patricia moved to Draper, Utah with Lane and moved to St. George, Utah in 2007.

Funeral services will be held at 11:00 A.M. on Friday, June 15, 2018 at the LDS Sunset 10th Ward, 820 North Valley View Drive in St. George, Utah. Prior to services, a viewing and visitation will be held at the church at 10:00 A.M., where friends and family may call. Interment will follow services at Tonaquint City Cemetery.

The family wishes to thank Applegate Hospice and their wonderful nurses, CNA's, social workers and chaplains, without whom Patricia would not have received such great care; Dr. Jason Swigert, who was her hospice doctor, but also her personal doctor for many years - and his staff; the management, staff and residents at the Mesa Palms Beehive Home in St. George who became our family for 7 months. There were many others who contributed untold service to Patricia over the past year and a half. We are very grateful for their efforts.

Arrangements made with Serenicare Funeral Home in Salt Lake City. Kent and Terri Smith have done an outstanding job. We also want to thank Irene Casper and Morgan Sulz from Affordable Funerals and Cremations in St. George for their loving care and service to Patricia. Irene and Morgan have been long time friends and we are grateful for their generosity.

To order memorial trees or send flowers to the family in memory of Patricia Ann Smith, please visit our flower store.
Send a Sympathy Card