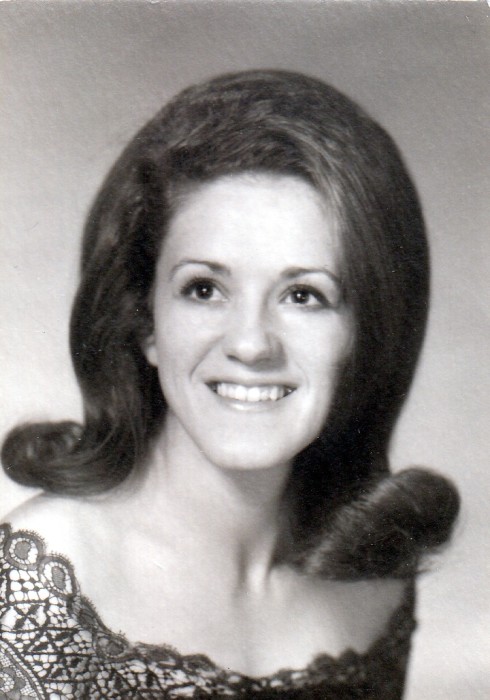 After a brave battle with cancer, our beloved Mother, Grandmother, Great-grandmother, Sister, Aunt, and Friend, Renee Prefontaine Jones passed away on Sunday, May 29, 2016, lovingly surrounded by her children. Born on June 10, 1945, in Kingman, Arizona, Renee was the eldest daughter of Robert Francis Prefontaine and Alice Joyce Claire. She grew up in Kingman, graduating as the Prom Queen and the Valedictorian of the class of 1963. She joined The Church of Jesus Christ of Latter-Day Saints when she was 21, and was a very devoted member to the Church and to her Savior for the remainder of her life. She attended Northern Arizona University and Brigham Young University. She married in 1969, and the birth of her first daughter came one year later, followed by five more children over the next ten years, fulfilling her greatest desire in life of becoming a mother. Her children were the loves of her life. She was incredibly skilled with her hands. She continued to magnify her role as a mother by pursuing the development of her talents in order to help support her children. She was not only a homemaker, but an entrepreneur, a seamstress, an artist, a teacher, a carpenter, a medical transcriptionist, and her final occupation was as a caregiver. Her entire life was spent in service. She was loved for her willingness to give all she had. She loved people! Renee was passionate about everything in which she became involved. The most precious thing in her life, besides her Heavenly Father and her Savior, Jesus Christ, was her family. She lived for them! That was apparent in her love of genealogy and temple work. She has volumes and volumes of pictures, letters, memories, and mementos, evidence of the fact that her life revolved around serving those she loved! Her love and talents will be greatly missed.

Services for Renee will be held at 11 am on Saturday, June 11—one day after her 71st birthday—at the Southern Estates Ward Building in Mesa, Arizona. The address is: 920 S. Lindsay Road, Mesa, AZ, 85204. There will be a closed casket memorial held at 10 am. Graveside services at the Mesa Cemetery will immediately follow. Flowers may be sent to the Southern Estates Ward Building the morning of her services. We love you “Gramma Nay”.

To order memorial trees or send flowers to the family in memory of Renee Jones, please visit our flower store.
Send a Sympathy Card