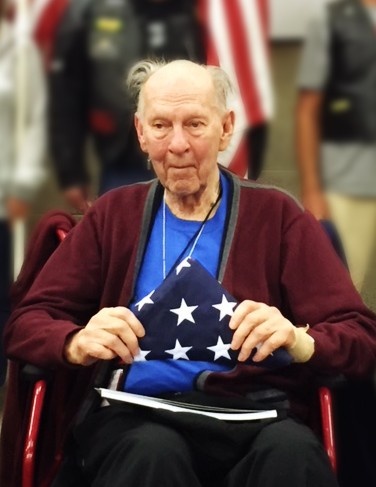 Richard Yates Merrell, urban planner, World War II Veteran and beloved uncle and friend to many died December 13, 2017. He was 94.

Born in Brigham City, Utah, December 9, 1923, Richard was the fifth child of Alice Violet Yates and John Francis (Frank) Merrell. He grew up not only with Frank and Alice’s children, but also with the children of Frank Merrell’s wife, Ida Hepworth Merrell, who passed away in 1913.

Growing up, Richard worked in the family businesses, primarily sugar beets and hay and the Merrell Lumber and Hardware Company founded by his grandfather, John Finley Merrell, a Mormon pioneer. However, grandpa died when Richard was only seven and Dick’s father passed when he was only 13. Times were tough in the midst of the Great Depression.

Richard graduated from Box Elder High School in the spring of 1942 and enlisted in the United States Army Air Corps in November of that year. Trained as a B-17 Radio Operator and stationed in Suffolk England, Dick flew 23 combat missions over Germany and Czechoslovakia in early 1945 and lived to tell about it, a rare feat. Then as the war ended he flew four or five humanitarian missions dropping food, by air to starving people in the flooded Netherlands.

Returning home, Dick moved to Washington, D.C. where he worked for nine years for what became the National Security Agency, including several years stationed in Frankfurt Germany.

Dick then returned to Utah to pursue his education at Utah State University. He received a Master’s Degree in Political Science in 1960 with a graduate thesis on Federal aid to education. He then began a career in urban planning, first for the City of Ogden and later for the State of Utah.

Though Dick never married, he was a family man visiting family around the country and participating in family events. Since his sister Donna Jane passed away in 1979, Dick has helped watch over her daughter, his dear special needs niece, Alice Ann. He was the primary caretaker and support for his mother in her later years, visiting her daily in her apartment in Salt Lake until she passed away in 1987 at the age of 100.

Dick had an infectious laugh. He inherited his mother’s love of conservative politics and was always ready to discuss the national political scene. He enjoyed research and writing. He wrote a cold war inspired work of fiction entitled “The Empty Weapon” in 1972.

Dick was a devout member of the Church of Jesus Christ of Latter-day Saints serving in various callings including service in the Salt Lake LDS temple for several years. He loved to research doctrinal and Church history issues, writing on topics as diverse as missionary work in the 19th century and the meaning 12th chapter of the Book of Daniel.

In September 2015, he returned to Washington, D.C. on an Honor Flight to be saluted by the nation for his service in World War II. He received the honors humbly, but you could tell that the recognition was very much appreciated.

He represents the last of his generation in the Merrell family and is part of the “Greatest Generation” of which Tom Brokaw has written so well. He left a legacy of faith, hard work, honesty and integrity. He is survived and loved by a host of nieces, nephews, their children and grandchildren who join with his friends in saluting his life and are comforted by the thought of the joyous reunion he is having with the members of his family who have gone before.

To order memorial trees or send flowers to the family in memory of Richard Yates Merrell, please visit our flower store.