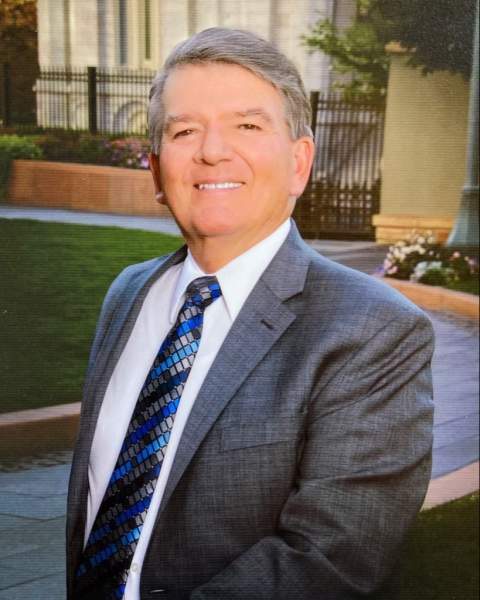 RONALD TRACY STEVENS – On September 6, 2022, Ronald Tracy Stevens, age 75, passed away unexpectedly at his home in Cottonwood Heights sleeping next to his dear wife, Margie. Ronald Stevens was born to John Wilson and Carol Lewis Stevens on August 31, 1947, in Santa Monica, CA. At age 3, he moved to Farmington, Utah with his family. “Ronald’s Grandpa, Clyde Lewis, bought his family a dance hall, Scatter Hall Cafe, to remodel and live in”. Ronald and his family helped with painting and construction. He learned to be a hard worker and serve others. Ronald’s favorite place to play and find solitude was in the forest trees on the north side of his home. This is where his love for nature came from. Ronald has 3 siblings; Clyde Stevens (Carolyn), LeAnna Barber (Ray), and Dawndra Mills (Scott).

At age 7, Ronald discovered his passion for playing the Violin. He was the Concert Master for the Davis Youth Orchestra. As a Senior at Davis High School, Ronald graduated as a Sterling Scholar in the category of music. Ronald had many achievements as a violinist such as: Mormon Youth Choir and Symphony Soloing, “Reverie” by Claude Debussy. Concert Master and Conductor in the Jay Welch Chorale. Concert Master for the University of Utah Symphony and the Utah Symphony. Ronald and Margie sang together in many choirs such as; Jay Welch Chorale, Mormon Youth Choir and Symphony, and Salt Lake Choral Artist.

Ronald served a full-time mission for The Church of Jesus Christ of Latter-Day Saints in the Hill Cumorah, New York Mission. He had a love for the Savior and The Book of Mormon, that grew from his mission president Reed Bankhead. He served 18 months in Binghamton, New York where everyone knew Elder Stevens as an enthusiastic, diligent, and faithful missionary. He baptized many people. While serving at the Hill Cumorah pageant, Ronald was over the music. He met Margie, a Pageant Missionary at the Hill Cumorah and asked her to sing a beautiful melody in the Sacred Grove. After Ronald finished his mission, he attended late registration at the University of Utah where once again Margie caught his eye. Ronald and Margie ate their sack lunch at the Institute building every day as they built their friendship and fell in love. Ronald and Margie were married in the Salt Lake Temple on March 25, 1970 and raised their family in Cottonwood Heights, Utah. On their 50th Wedding Anniversary, their children performed a musical program of love songs to symbolize their celestial marriage. Just this year, they celebrated 52 years of marriage together with their 10 children and Ryan in Heaven. Margie was the light of his life and Ronald was her rock. They were inseparable and loved being together. Ronald served in many callings in The Church such as: Bishopric, Elders Quorum and High Priest President, Stake Missionary, and more. His most favorite callings in the church, was serving with Margie as Nursery Leaders, Ward Missionaries, and as a temple workers in the Salt Lake Temple.

In the summer time, you would find him hiking, running the canyon, or relaxing at the cabin in the crisp, clean air. Each year Ronald and Margie spent two days with the grandkids at the cabin teaching them the gospel, playing games, creating skits, and making homemade dessert waffles. It was common to find him in the kitchen cooking for others. Some of his favorite snacks include: yogurt, cheese, almond butter, and chocolate covered nuts. He valued annual vacations with his family to build treasured relationships. His witty sense of humor made light of situations and kept everyone laughing. In his spare time, Ronald loved watching The Chosen, attending the symphony, supporting and catering the Utah Jazz, attending musicals and plays, dancing with his sweetheart, and listening to Neil Diamond. He enjoyed cheering up the elderly, comforting and understanding babies and children, and bonding with animals (especially Powder, Butterscotch, and Skip).

Ronald discovered his love for catering as a teenager when he managed the Lagoon Office and Lagoon Food Service which created the opportunity for him to become the manager of Utah Foods and Catering at the Salt Palace. Ronald picked up Margie in his food service truck to cater with him. This allowed them to spend time together. He then opened up his own restaurant, K-Bobs Steakhouse. In 1988, Ronald started his own catering business ET Enterprises, this became a family business. Over time, all of his children and grandchildren have loved spending time with Grandpa catering and serving Grandpa’s specialties. Ronald served as the food supervisor for the Military Reserves and National Guard. He also served the Knights of Columbus, Department of Defense, weddings, and other events.

Ronald loved to serve his country. He was a medic for the 144th Evac Hospital Unit. While serving in the Gulf War, he was appointed the position of head chef and had to design a kitchen, so they could feed the troops. Ronald was invited to perform the violin for the Veterans Day concert at Utah Valley University in 2005. In May 2013, Ronald was honored in the Music and the Spoken Word special as a Veteran who served 30 years in the Utah National Guard.

Ronald was known for his sincerity and forgiving heart. The thing he loved most in his life was his wife, children, and extended family. He was a loving, devoted, selfless father who sacrificed and served each child individually and his wife daily. He was known to put everyone’s needs before his own. As the patriarch of his large family, he strived to listen to and follow the spirit. His greatest Christlike attributes were obedience, being a peacemaker, teaching by example, and patience. Ronald will be missed not only by his family, but everyone he came in contact with. Heaven received an angel, but today we have all gained a guardian angel.

Please click the link below to join the funeral service:
https://zoom.us/j/93493778646
To order memorial trees or send flowers to the family in memory of Ronald Tracy Stevens, please visit our flower store.