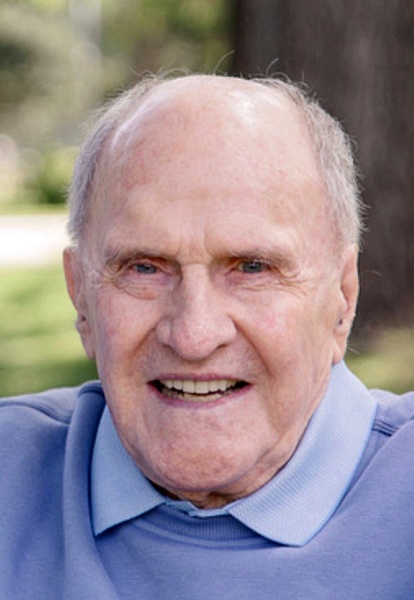 Russell William Berrett, our beloved husband, father, grandfather, and great-grandfather, passed away on Sunday, July 12, 2020, in Bountiful, Utah. He was surrounded by his loving wife and three daughters as he returned home to our Heavenly Father.

Russ was born on November 30, 1931, in Salt Lake City, Utah. He was the second son born to Robert William and Mabel Jones Berrett. He attended schools in the area and graduated from West High School. Upon graduation, he enlisted in the Utah National Guard with his brother and was soon activated. He was sent to Wisconsin and, because he knew how to type, he was assigned to the administration department. He was stationed at Los Alamos, New Mexico, and while there, was assigned to the Atomic Energy Division. He was deployed to Eniwetok Island and witnessed the world’s first hydrogen bomb explosion.

After returning home to Salt Lake City, he was discharged from the Army. He began his schooling at the University of Utah and started working various jobs. He worked on the Salt Flats for AAA driving tests, ran a ski resort at Pineview Dam, and worked for Deseret Chemical and Tooele Ordinance Depot. He then became employed at AT&T as a sales representative and handled telephone communications for large corporations. While at AT&T, he met Shirley Stanger, who was working as a service representative, and they were asked to work together to organize a Thanksgiving Dinner for a needy family. Their relationship grew and in May 1957, they were married in the Idaho Falls Temple.

In 1958, they moved to Idaho Falls, and Russ assumed the responsibility of the farming entities of the family business, which later became North Highlander Farms. Dad was known for miles around for having a beautiful farm and the most state-of-the art equipment. He was often recognized for the quality of his product and was known for implementing progressive techniques of farming. He retired from that responsibility in the early 2000's when the farms were sold. He appreciates the good men who worked with him during those years.

Russ and Shirley were blessed to have three special daughters. Memories were created on the lake, on the ski hill, in the motor home, and at the farm. In the early 70's, they built their cabin on the outlet of Henry’s Lake, and it quickly became a haven for family and friends. It was Russ’ favorite place to be. Some of the many attributes we love about him include the value of hard work, optimism, humor, kindness, wisdom, and generosity.

During their many years in Idaho Falls, they were blessed with wonderful, lifelong friends and neighbors with whom they raised their families, traveled the world, and supported each other. These good people are very special to them. Russ was a member of the Church of Jesus Christ of Latter-Day Saints and served in positions in the Elders and High Priest Quorums, Sunday School, and as a High Councilor.

In 2018, Russ and Shirley decided to move into Creekside Senior Living in Bountiful, Utah, so they would be closer to most of their children, grandchildren, and great-grandchildren. They were blessed to have made many memories as they spent time living closer to family. They also made many new and dear friends while living at Creekside.

The family expresses their love and gratitude for the kind service given to Russ by the hospice nurses and aides from Caregiver Support Network, as well as the concern and thoughtfulness given by the employees at Creekside Retirement Center.

Military rites will be performed by the Bonneville County Veterans Memorial Team and the Idaho Honor Guard.

To order memorial trees or send flowers to the family in memory of Russell William Berrett, please visit our flower store.