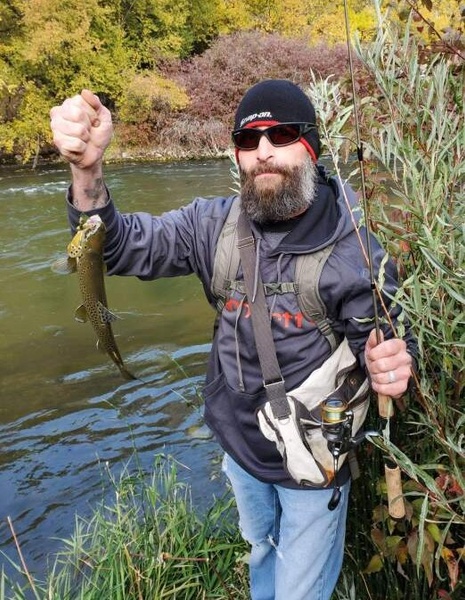 It is with a very heavy heart that we announce that Steven Michael Petersen (Mike) left this earth on Friday, March 19th 2021. Mike was born in Ogden, Utah, January 21st, 1982 to Steven Glen Petersen, and Cheryl Ann Coomes. Mike graduated from Ben Lomond High School in 2000.

Mike was a welder for many years. He took great pride in his work. He enjoyed fishing, hunting, camping, and golfing with his family and friends. He loved spending time at Lefthand Fork Campground. His love for fishing the river was immense. A lot of weekends he could be found playing cribbage with his family.

On July 1st, 2007, Mike and his first wife, Jamie Hunter welcomed their beautiful baby girl, Bailee. Bailee was the center of his whole world.  Their bond was unbreakable,  and their love for each other was beautiful.  Mike and Jamie were later divorced.

Mike married Joanna Petersen on April 26th, 2020. They were together a short time before marriage, but had accomplished so much together and conquered so many obstacles. With this marriage, he became a step-father to Joanna's 4 children, then in January 2021, he became PopPop to a handsome grandson. He always said he couldn't wait to teach that grandbaby to fish and hunt. He was very proud to have purchased a home with Joanna in October of 2020, and was happy that things were moving in a good direction in his life.

Mike was a goofball, and loved to make people laugh. You could always find him saying some random, off the wall one-liners, that gave everyone quite a laugh.
Anyone that knew Mike, knew his charming, funny, witty personality. Many people loved him for that.

There will be a celebration of Mike's life for family and friends to gather, and have some dinner, on Saturday,  April 10th, from 1:00pm to 7:00pm, or later depending on the crowd. This will be held at the American Legion in Clearfield.  The address is 345 Depot St, Clearfield, UT 84015.

To order memorial trees or send flowers to the family in memory of Steven Michael Petersen, please visit our flower store.