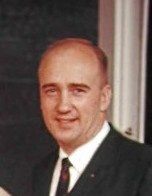 Thomas Fenton Jensen, our beloved father, grandfather and great grandfather passed away peacefully in his sleep on November 25, 2019, aged 89. Tom was born November 14, 1930 to Nephi and Myrtle Jensen of Salt Lake City, Utah. He graduated from East High School in Salt Lake City and attended the University of Utah.

Tom served in the military during the Korean War.

Tom is a member of the Church of Jesus Christ of Latter-day Saints. As such, he served throughout his life in various capacities including as a missionary to Brazil as a young man. With a great love for the Brazilian people, he later along with his family, was called to serve as a mission president to the then Brazil South Mission from 1967-1970. He also served as a Bishop and in a Stake Presidency as well as a Temple worker and Sealer in the Salt Lake Temple for over 30 years.

Nothing was more important to Tom than his family and his Church. He was preceded in death by his beloved wife of 63 years, Sherma Allred Jensen whom he married in the Salt Lake Temple on September 21. 1953. Tom & Sherma's family include 4 children which are Terry A. Casto (Dick), Thomas A. Jensen (Susan), Richard B. Jensen (Greer) and Elizabeth Wilde (Gabe). He has 13 grandchildren and 26 great grandchildren.

Tom easily made many friends, helped people where ever he could and is a great example to his family. We miss you dearly, Dad!

Funeral services will take place at 12:00 Noon on Friday December 6, 2019 at the Church of Jesus Christ of Latter Day Saints 3103 East Craig Drive, Salt Lake City, Utah. A viewing will be held at the church on the same day from 10:30 until the time of the service. Interment will be in the Holladay Memorial Park Cemetery.

To order memorial trees or send flowers to the family in memory of Thomas Fenton Jensen, please visit our flower store.
Send a Sympathy Card