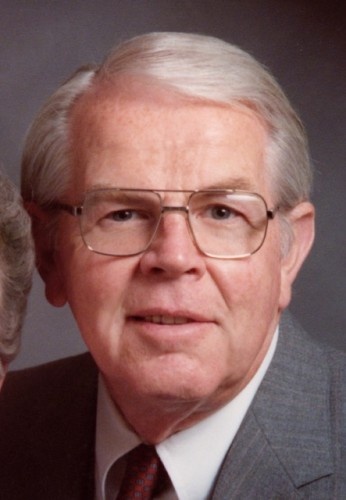 William Emory Gentry III, passed away peacefully at home on Sunday, February 22, 2015, at the age of 92. He was a long time resident of Bountiful Utah, before moving to Laguna Woods, California in 2005. He enjoyed good health and an active lifestyle until his final battle with cancer.

Born in Morrisville, PA on August 12, 1922, he was the second child of William E. Gentry II and Gertrude Bell Gentry. He attended Morrisville High School where he excelled in football. He was offered a scholarship at Pennington School in the fall of 1940, His preparation for college was interrupted when he enlisted in the US Navy in 1942 and was assigned to the South Pacific for the duration of WWII. Bill was a radio operator and rear gunner for the torpedo squadron aboard the Chenango battleship. In July 1944, his crew was the first US plane to land on Guam after the ally invasion.

During the summer of 1944, Bill met up with his old friend Ned Eckel and saw a picture of the beautiful Roberta Eckel, Ned's Sister. Bill was instantly attracted and after a brief courtship, they were married on January 9, 1945, in Chicago. Bill returned to active duty and Roberta to nursing duties, until after the war in August of 1945. Once reunited Bill and Roberta continued to strengthen their marriage and to build a family for the next 70 years.

They lived in Southern California, Minneapolis MN, and in 1970 moved to Bountiful, Utah where he retired in 1984 after 37 years with General Mills Corp. It was in Bountiful, that Bill and Roberta became interested in genealogy and began extensive research on their respective families. In September of 1980 he and Roberta joined the Church of Jesus Christ of Latter-Day Saints and remained active in church service, In 1993, he and Roberta accepted an LDS Genecology mission to Scotland.

At the age of 50 he started skiing and was an enthusiast through the remainder of his life. One of his great joys was obtaining his free ski pass at Brighton once he turned 70. Bill was a fan of all sports and personally loved to golf, ski, camp and fish.

In 2005, Bill and Roberta moved to Laguna Woods, CA to be near friends and family. He loved the beautiful Southern California surroundings and weather.

William is preceded in death by his older sister Doris Burkhardt (Fred), his younger brother Robert (Peggy), and his great-granddaughter Kylie Williams. His wife of 70 years, Roberta Eckel Gentry, followed him in death just 7 days later on March 1, 2015 and there is peace in knowing they are together again. He is survived by his sons, Bill (Joyce), Scott (Gail), Craig, Mark (Brent) and Kurt (Catherine), as well as 13 grandchildren and 20 great-grandchildren, along with many loving nieces and nephews.

Funeral services will be held at 11 am, Saturday, March 14, 2015, at the LDS Canyon Park Ward on 1190 East Bountiful Hills Drive, Bountiful, Utah. The family will be receiving visitors at the church that morning at 10 AM. Internment will immediately follow the service at Lakeview Memorial Cemetery. Donations to cé¢ncer research are encouraged in lieu of flowers.

To order memorial trees or send flowers to the family in memory of William Emory Gentry III, please visit our flower store.